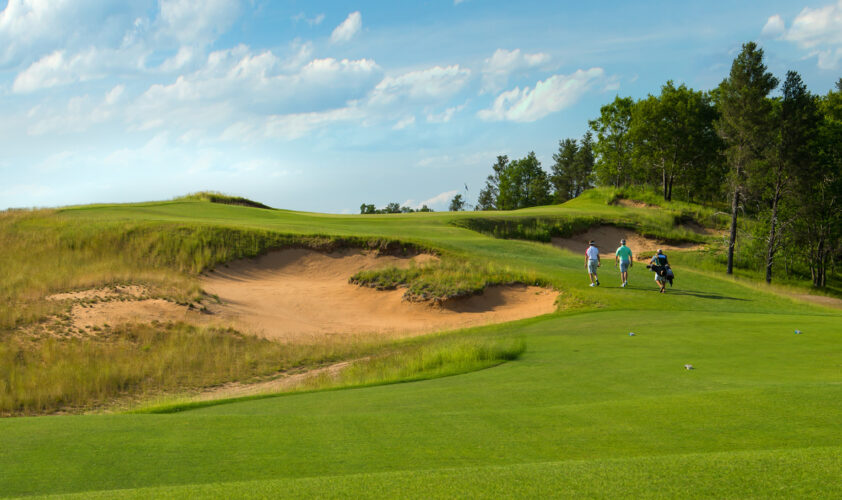 Sand Valley Resort is Getting Bigger, Bolder and Better than Ever Before

The sprawling Sand Valley Resort in central Wisconsin, already one of America’s premier golf destinations, is getting a whole lot bigger.

In May, Sand Valley (pictured above) began on a multi-facility expansion that will include a restaurant, pool complex, tennis center, practice facility and what is being billed as the “world’s largest putting course.”

“The putting course going to be eight acres, so it’s almost 400,000 square feet,” said Michael Keiser, who owns and manages Sand Valley along with his brother, Chris. “The Himalayas at St. Andrews is three acres. The Punchbowl at Bandon (Dunes) is 2.5 acres. It’s hard to fact-check, but I don’t think anything is close to this.”

The centerpiece of the expansion is Sedge Valley, an 18-hole course designed by Tom Doak and in the early stages of construction. The course is inspired by the classic heathland courses of London and the English coast. Doak is simultaneously working on the Lido, a private club associated with the resort. The Lido is scheduled to open in 2023, followed by Sedge Valley in 2024.

One of the most-whispered secrets in the Midwest golf scene is secret no more. When it reopens in late summer of 2023 after a complete overhaul, the former Cherokee Country Club in Madison, Wisconsin will be known as TPC Wisconsin.

It was announced in May that the Madison property would become the 30th course in the PGA Tour’s TPC’s network of upscale golf facilities.

The club, the only one in Wisconsin to carry the TPC banner, will be added as a licensed property, with ownership and operations remaining in the hands of Cherokee Park Inc. Dennis Tiziani, Cherokee Park owner, said the transition will allow the course to offer “the one- of-a-kind experience we envision for our members.”

The course built on the edge of the Cherokee Marsh opened 60 years ago. It closed after last season to allow reconstruction of the course, including the regrading of all fairways and greens, replacement of greens, tees, bunkers and cart path system, a new irrigation system, and environmental improvements to existing ponds and water- ways. PGA Tour pro Steve Stricker, a 12-time tournament champion who is Tiziani’s son- in-law, is leading the design work.

“I couldn’t ask for a better scenario with my first golf course design project to be the same property that I spent the better part of 30 years of my golf career and where I have raised my family,” Stricker said.

The overhaul of the property will also include improvements to the golf academy adjacent to the golf course and the club- house. In addition to golf, the new TPC Wisconsin will offer tennis, swimming, pickleball and other activities. The remodeled Golf Academy will feature indoor hit- ting areas, club and putter fitting areas, an indoor putting green, room for food and beverage offerings and a short game practice area with Toptracer technology.

Seeding of the property is expected to be completed soon and the course is slated to reopen by August 2023.

Back From the Grave: Illinois Course Reborn

It’s not often a course goes to hay and lives to see another day, but that’s what’s happened to the newly renamed Lynx Golf Course at Westlake Village, in Winnebago, Illinois.

The former Westlake Village Golf Course lost a reported $135,000 a year over several years, prompting the original owners to sell the 131-acre property to a literal haymaker. But the land was bought by brothers Steve and Scott Leathers this spring for $550,000, with plans of returning it to its former glory.

The biggest lift was the renovating of the green complexes, delaying the start date to Aug. 1. The brothers have big plans, and said they’ll invest a “significant” amount of money into it over the next five years. In the meantime, the club offers full food and beverage and even on-site gaming, in addition to the David Esler-designed course.