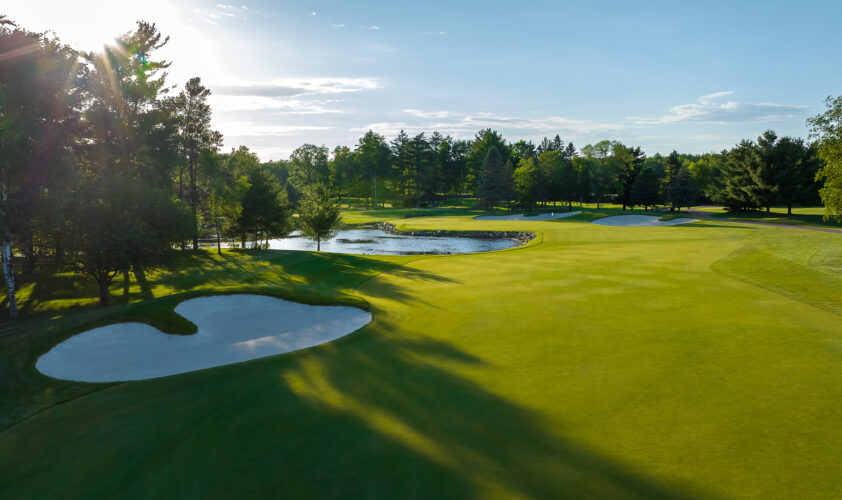 After Incredible Upgrades, Reborn SentryWorld Reopens More Stunning Than Ever

STEVENS POINT — Links courses are all the rage in 21st century golf course architecture and “brown is the new green” is the catchy mantra. Still, there’s nothing quite like a verdant, tree-lined course — softer around the edges and easier on the eyes than its windblown links cousins— to inspire the golfing soul.

SentryWorld, the course that designer Robert Trent Jones Jr. famously called his Mona Lisa, has been doing just that for four decades. Built on the sprawling Sentry Insurance campus, it has long been a standard-bearer for parkland courses in the Midwest. Beauty is in the eye of the tee-holder, and nearly everyone who plays SentryWorld agrees that it lives up to Jones’ declaration.

Like succeeding incarnations of the Apple iPhone, SentryWorld has kept its best features and added layers of improvements. During the most recent closure to prepare the course for the 2023 U.S. Senior Open, a SubAir System was installed beneath the greens and drip-line irrigation was installed in the bunkers.

Also new when the course reopened on June 1, 2022, were 20-minute tee times, which ensure an unhurried pace of play and allow the golfer to immerse himself or herself in the round with minimal distractions. 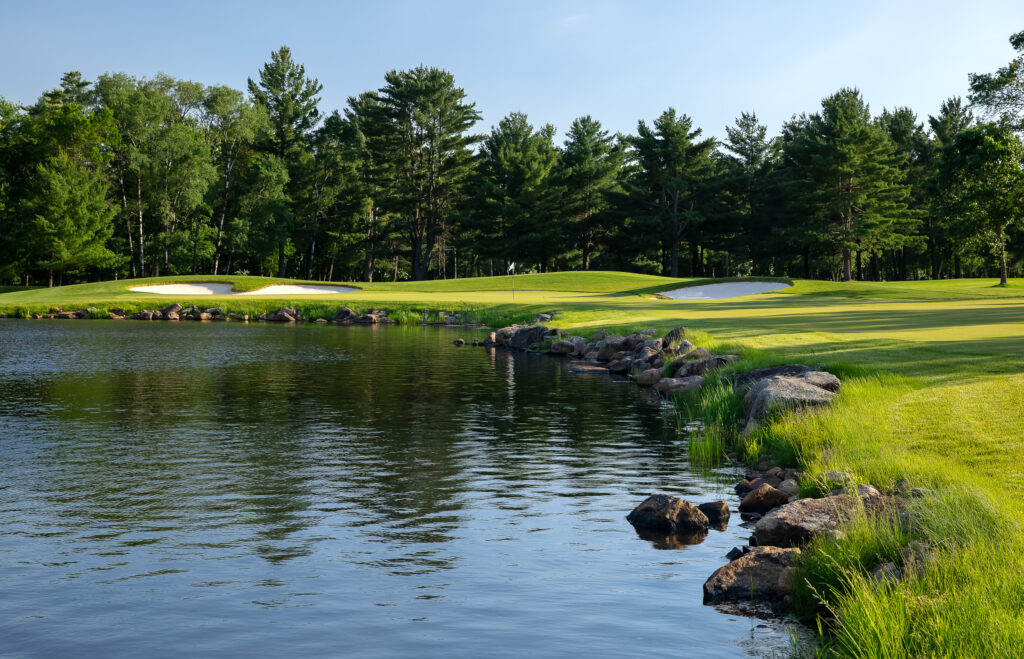 SentryWorld now charges $275 per round, but that fee is all-inclusive. Two handsome concession buildings were built at strategic crossovers; golfers pass them four times during their round and have their pick from hot and cold sandwiches, a wide variety of snacks and a full bar. They can take as much as they want — everything, including tipping, is included in that $275. Pay in the golf shop and leave your wallet in your car.

It is not an inexpensive round of golf, but you’re paying for the experience: ideal pace of play, impeccable service and amenities and indulgences which cannot be found at your local jam-packed course, with its nine-minute tee times, rattling gas carts and beverage carts that may or may not show up.

But the biggest change is the addition of the Inn at SentryWorld, built adjacent to the 18th fairway. The 64-room hotel opened March 29, 2022, to rave reviews and completes the resort, because traveling golfers no longer have to stay off property.

“I think the arrival of the new Inn was such a key amenity,” said Mike James,SentryWorld’s general manager. “It really transforms us into a true destination facility. People want to stay for a couple of days and not worry about getting in their car and driving someplace.”

The Inn was designed by Swaback Architects of Scottsdale, Arizona., using the same dramatic lines and materials it used in the redesign of the clubhouse in 2013-’14. The two buildings, located practically side by side and connected by a walkway, blend seamlessly with one another.

“They look like they were built at the same time,” said Chad Bates, the Inn’s general manager.

All but 12 of the rooms feature balconies overlooking the 18th hole. The private third floor has a spacious Executive Lounge which can be accessed by guests who stay in junior executive suites on the floor. Complimentary snacks and beverages can be enjoyed on a terrace overlooking the course.

However, it’s the little things that add up to a memorable stay at any hotel, and this is where the Inn at SentryWorld excels.

Toe-stub lights under the beds are activated by motion, so a trip to the bathroom in the middle of the night doesn’t become, literally, a trip to the bathroom. The bath sheets — most people call them towels — are big enough to swaddle a small car. The ingredients for a Wisconsin Old-Fashioned, along with instructions on how to make one, are left in every room ($12). Upon checkin, guests are offered a Spotted Cow or a glass of wine. 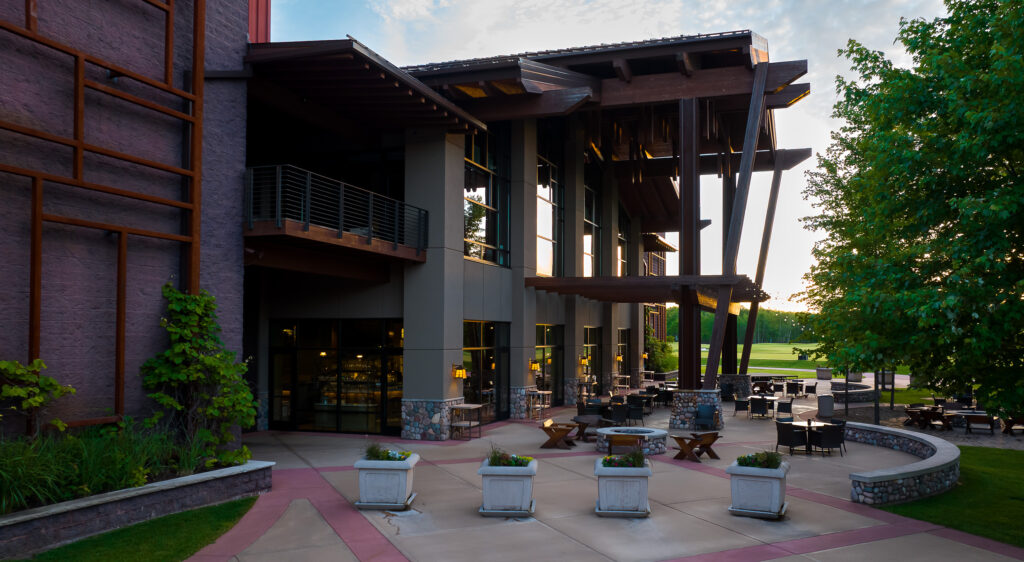 The back patio of the resort’s clubhouse is a perfect place to reflect on your round.

“If someone is coming over to your house to visit, you’re going to offer them a drink when they arrive, and you’re probably going to have something they would prefer,” Bates said. “It’s those little things that people
notice.”

The Inn also features The Outfitter, which Bates calls “a gift shop on steroids.” In addition to the typical sundries and snacks, The Outfitter rents Trek bicycles and fishing poles in the summer and cross country skis and snowshoes in the winter.

SentryWorld’s history of stops and starts over the last decade would be a death knell for many golf facilities. But because the course is owned by a Fortune 1000 company, there has never been pressure to generate revenue through rounds played. The company has taken its time, and spared no expense, to make sure it gets things right.

“We consciously don’t worry about the number of rounds played,” said Pete McPartland, chairman, president and CEO of Sentry Insurance. “I don’t want the course to be overplayed. It’s not about the more golfers, the better. It’s about a great experience for people that do play the course.”

Steve Stricker and Jerry Kelly, lifelong Wisconsin residents, are intimately familiar with SentryWorld — Stricker won a state high school championship there in 1984 — but nearly every other golfer in the field for the 2023 U.S. Senior Open (June 29-July 2) will be seeing SentryWorld for the first time.

They will find a course nearly as perfect in its presentation as turf and sand can be. The greens are firm and fast, the surrounds flawless, the fairway turf tight, the bunkers works of art. If it is not Augusta National in terms of conditioning, it is very, very close.

SentryWorld can be stretched to 7,300 yards. The course will test the players off the tee and to a greater extent on shots into the bold green complexes. Deep bunkers, false fronts, falloffs into collection areas and audacious contours will require short-game imagination and execution.

Most of the fairways on the par-4s and 5s have been narrowed, some of them considerably. If you’ve played the course once or twice you probably wouldn’t notice, but for those who have played it often, the difference is dramatic. The narrowing of fairways necessitated the moving of fairway bunkers, and a few strategic bunkers were added. The greens on Nos. 5 and 18 were rebuilt and the green on No. 4 was modified. 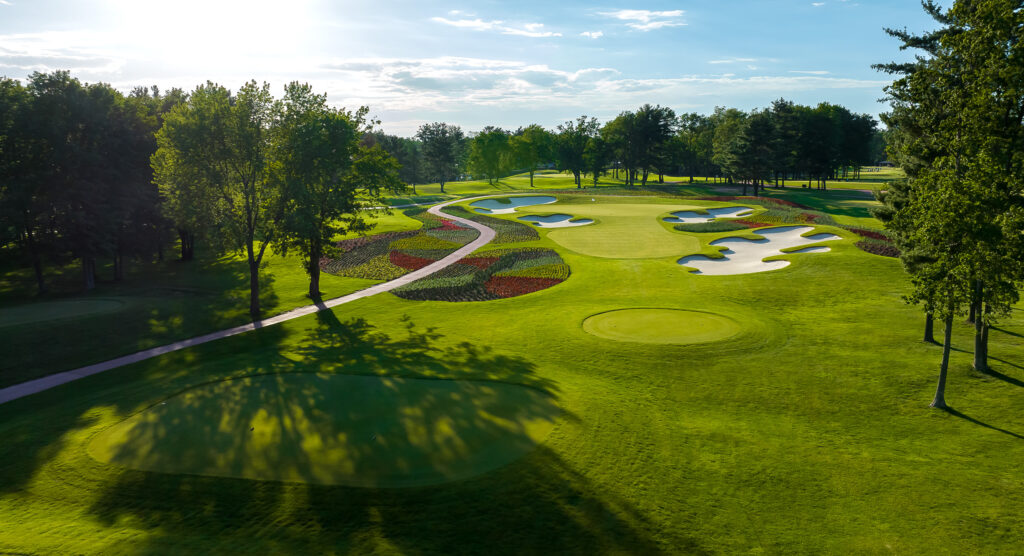 The signature “Flower Hole,” the par-3 16th, was left untouched. The hole dates to the course opening in 1982 and was the idea of then-Sentry chairman John Joanis, who suggested to Jones that a “lake of flowers,” rather than water, surround the green.

“We knew that we had to make some changes,” James said. “The USGA wants to challenge these players, especially in major championships, with every club in their bag. We also added a few new tees so the golf course now stretches just over 7,300 yards. On top of that we added the SubAir System just to make sure that we can control, as much as we can, the greens during the championship. The greens will be as firm and fast as we want them to be.”

The USGA was blown away by Sentry’s management team, staff and enthusiastic community support for the 2019 U.S. Junior Girls’ Championship. Hundreds of volunteers showed up unannounced on the Saturday morning of the championship to clean up debris after a violent windstorm.

“It was stunning,” McPartland said. “I’m not sure if the officials from the USGA had encountered a lot of that when they’ve had rainstorms and power outages. I would like to think that that had some influence with (SentryWorld getting) the Senior Open. The USGA is thinking that, OK, we don’t have to worry about volunteers or enthusiasm for this tournament in central Wisconsin.”

The pride of ownership at SentryWorld extends beyond the walls of Sentry Insurance headquarters, just down the road from the course. The USGA’s requirement of 1,800 volunteers for the Senior Open was met more than a year in advance of the championship, and a waiting list was established. People in Stevens Point are proud of the course, and deservedly so.

“I think this is a gem for our community,” said Sara Brish, executive director of the Stevens Point Area Convention & Visitors Bureau. “Sentry and the SentryWorld team has been tremendous to this community for the past several decades and I think the community is really appreciative of that and really embraces them.

“Not only does Sentry and SentryWorld take pride in the community but the community really respects what they’ve done to build this community and make it a place where people want to live and play and recreate.”

And, also, to play golf.