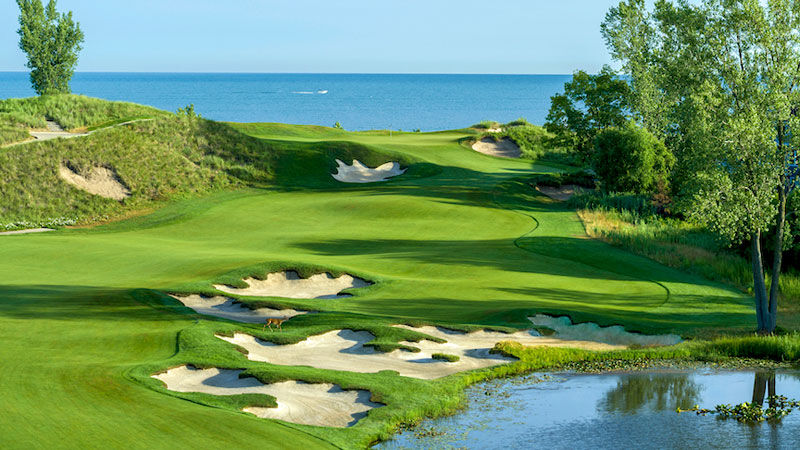 These two courses that Jack built are well worth the trip

If you’ve checked off the usual suspects for buddy trips or multi-day golf getaways around the Midwest, I’ve got a recommendation you won’t find in the golf magazines.

It’s the Jack Nicklaus Signature Course double dip across the pond, in the southwest corner of Michigan.

Just an hour apart, The Golf Club at Harbor Shores in Benton Harbor and American Dunes Golf Club in Grand Haven – the former an incredible reclamation project, the latter set to open in May 2021 – are as good as anything you’ll find in the Midwest. And the stories behind them are equally terrific.

They’re so dramatically different in look and feel and in the way they challenge a golfer mentally and physically, it’s hard to believe Nicklaus designed both. Once known as the builder of backbreakers, the Golden Bear has evolved as an architect. Gone are the days, thank goodness, when owners asked him to build courses with elephants buried under greens and 145 Slope ratings.

Harbor Shores is about 3½ hours from Milwaukee, depending on Chicago traffic, and American Dunes is another 70 miles north. Both are within a stone’s throw of Lake Michigan, with the seventh green at Harbor Shores perched on a dune overlooking the water. On a clear day, I’m told, you can see the Chicago skyline.

The courses haven’t yet collaborated on a marketing effort, but Joshua Doxtator, the general manager at Harbor Shores, has reached out to American Dunes GM Doug Bell. I can already see the headline over the full-page color ad: “Pure Michigan. Pure Nicklaus.” Or perhaps the slightly cheekier “Take Two Whacks at Jack.”

Here’s why you should think about planning a trip in 2021: 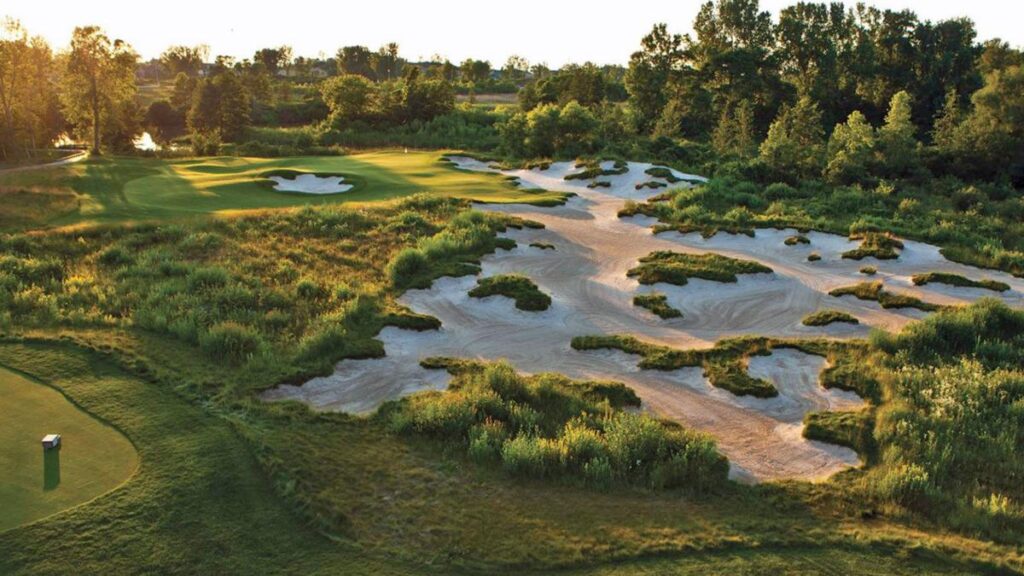 The Golf Club at Harbor Shores

Ben Hogan winning the 1950 U.S. Open after a near-fatal car accident and Tiger Woods winning the 2019 Masters to end an 11-year drought in the majors were nice comeback stories. But the biggest comeback in golf history may well be the remarkable transformation of a godforsaken site in depressed Benton Harbor.

When Nicklaus first saw the land that would become Harbor Shores, he said, “Where do you expect me to build this golf course?”

Everywhere he turned, he saw the rotting hulks of dilapidated factories and burned-out buildings, dumpsites and tangles of overgrown brush. A section of the land had been designated a Superfund site by the U.S. Environmental Protection Agency.

Once an industrial hub, Benton Harbor had fallen on hard times. During a severe economic downturn in the mid-1980s, more than 6,000 jobs were lost over an 18-month period. The city shriveled up and left a carcass rotting with crime, drug use, unemployment and desperation.

Whirlpool Corp., one of few companies that didn’t flee the city, and community leaders bet the ranch – in this case, $900 million in strategic investments – on Harbor Shores Resort and a surrounding 550-acre residential and recreational development. 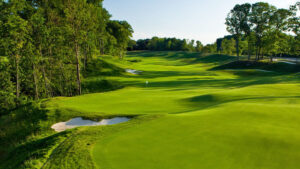 Today, Harbor Shores is a shining example of how a golf course can help transform a community. A portion of green fees are used to maintain Jean Klock Park, its beach and a 12-mile walking path. The park now generates more than $150,000 annually for the City of Benton Harbor.

Revenues above operating expenses are given back to the community for job training and educational programs. The First Tee of Benton Harbor, headquartered at Harbor Shores, is the only fully subsidized program of its kind in the Midwest. Visiting golfers can stay at The Inn at Harbor Shores, a 92-room luxury hotel, or in villas on the course.

I played Harbor Shores with Doxtator, the former GM at Thornberry Creek at Oneida near Green Bay, and Jackson Davison, the golf operations manager. They wear their passion for Harbor Shores on their sleeves (and, incidentally, are terrific players, with Davison, a former Michigan high school state champ and minitour player, playing the final 15 holes in 7-under to shoot 68).

Doxtator said three million square feet of industrial waste and materials and contaminated soil – enough to fill a football field 80 feet tall – had to be cleaned up before Nicklaus’ crew could start on the course. In 2008, the property had a state equalized value of $0; by 2017, the same land had a taxable value of nearly $37 million.

How’s that for a comeback?

Harbor Shores opened in 2010 and has played host to the Senior PGA Championship in even-numbered years since 2012 (this year’s event was canceled by the coronavirus pandemic). It’s a big, brawny championship course that’s a blast to play.

The three-hole stretch starting at No. 7, built along and atop a soaring dune near Lake Michigan, is as good as it gets. The seventh is a short but tricky par-4 with an elevated green featuring a sharply sloped false front. Just beyond is a pristine beach, once strewn with trash and hypodermic needles. The eighth is a dogleg right par-4, with the tee shot struck from the high point of the dune down to a partially hidden fairway. And No. 9 is a dramatic par-5 with another elevated tee box.

As we putted on the 15th green, a couple of kayakers on the once-polluted Paw Paw River paddled closer to watch. It struck me that golfers and kayakers experiencing the great outdoors here once would have been unthinkable.

Everything about Harbor Shores reflects attention to detail, and the customer is treated with a level of care found only at the highest of high-end courses.

“There are so many options of destination golf,” Doxtator said. “You can have accolades, you can have major championships, but if you’re not doing something different touchpoint-wise that makes people remember you, you’re just lost.”

Harbor Shores has 170 members but is open to the public, with 28 percent of play coming from Illinois, 26 percent from Michigan and 21 percent from Indiana.

“We’re working on it,” Doxtator said with a smile. 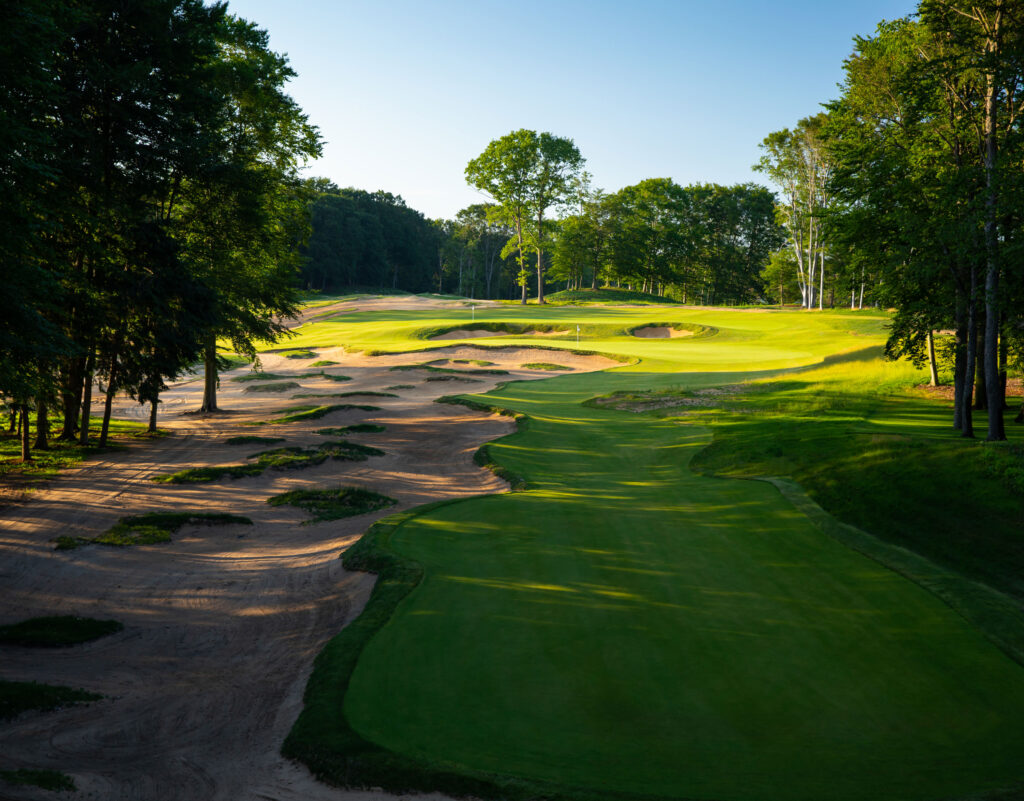 As our golf carts crested a ridge between the third green and the fourth tee box, the panorama before us – emerald fairways and greens framed by massive sand blowouts – was the “aha” moment we’d anticipated at American Dunes. The wow factor was off the charts. All three of us simultaneously whipped out our iPhones to take pictures.

The former Grand Haven Golf Club, a Jerry Matthews design that opened in 1965, was a tight, tree-lined course where 3-iron off the tee was the play even on some of the longest holes. Nicklaus came in, took out 1,000 trees, scraped off topsoil to expose the sand and re-routed several holes. What he created bears a striking resemblance to the courses at Sand Valley in central Wisconsin.

With five sets of tees, the course can be stretched from 4,754 yards to 7,213. The par-5 13th hole measures 673 from the tips, to which we politely said, “No, thank you.” From the middle tees (6,102), American Dunes provided just the right combination of challenging shots and ear-to-ear grins.

“I think the place plays with an awesome cadence – from long to short to big greens to small greens,” said Dan Rooney, whose family owned Grand Haven. “It’s so memorable.”

But golf is only part of the story at American Dunes. Rooney, a PGA professional, also happens to be an F-16 fighter pilot who served three tours of duty in Iraq.

Lt. Col. Rooney founded Folds of Honor right here at the old Grand Haven Golf Club. The first golf outing in 2007 raised $8,300. Since then, Folds of Honor, which provides scholarships to the families of military men and women who have been killed or disabled while on active duty, has raised more than $140 million and has awarded more than 28,000 scholarships.

Rooney approached Nicklaus in February 2018 to share his bold vision of turning Grand Haven, which was struggling financially, into American Dunes LLC, a fundraiser for Folds of Honor. Nicklaus listened for a few minutes, cut off Rooney mid-pitch and not only agreed to design the course, but waived his $3 million design fee.

“I didn’t get to serve in the military,” Nicklaus said. “I was married when I was 20 years old and (oldest son) Jackie was born when we were 21. But I always loved what the military represented and what they did to protect our freedom. When Dan came down to ask me, I knew there was no way I was going to say no. I was honored that he asked me to be part of it.”

One hundred percent of the profits at American Dunes will go to Folds of Honor. At 1300 hours (1 p.m.) every day, Taps will be played and the entire course will come to a standstill for 2½ minutes while a bell tolls 13 times, signifying the 13 folds that bring the flag to its triangle shape.

During the media preview Tuesday, Nicklaus and his wife, Barbara, raised an enormous American flag while a singer with a beautiful baritone sang the National Anthem, leaving more than a few of us with Titleist-sized lumps in our throats.

Rooney likened the experience of playing American Dunes to going to church and is proud of what it represents.

“The core values of American Dunes are unapologetic,” he said. “It is about military families. It is about education. It’s about our freedom and our faith, and I would put diversity in there. Forty-one percent of those scholarships have gone to minorities. This is a place where wonderful American ideals will live and breathe. I think it’s a unifier. I really do believe it’s a unifier.

“We are hopefully building a place that will have the reverence of a church that people will make a pilgrimage to that support and believe in our military and our families and education and faith in this country. We’re unapologetic about those values at American Dunes. How do you not agree with what we’re doing? This is a really good thing.”