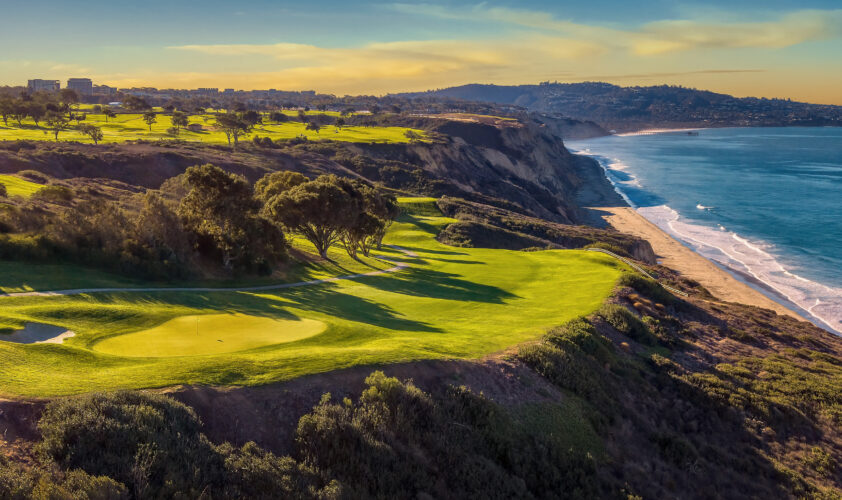 LA JOLLA, Calif. – There’s a stretch of fairways at this perpetual postcard known as Torrey Pines that runs closest to the Pacific Ocean, giving golfers the very best of many stunning views of the endless sea bordering one of golf’s most distinguished municipal tracks.

To find this picturesque slice of golfing serenity, however, golfers must do one of two things: Resist the temptation to focus a golf getaway here solely on the world- famous South Course – the undisputed jewel in the city of San Diego’s golf portfolio, the centerpiece of the annual Farmers Insurance Open on the PGA Tour and, for the second time in 2021, host of the U.S. Open — and give the oft-overlooked North Course a try. Or find enough time to play both.

Indeed, this sequence of visual bliss wasn’t showcased in January during the final two rounds of The Farmers. And it won’t help decide a major championship winner in June when the U.S. Open returns to the South Course for the first time since 2008, the year of Tiger Woods’ unforgettable overtime victory against Rocco Mediate. Tiger prevailed on the first hole of sudden death following what had been an epic 18-hole Monday playoff, featuring three ties and five lead changes, and Woods playing on an injured left knee that would sideline him for the balance of the season.

However, the best views at Torrey Pines are near the end of one of the most pleasant surprises in all of golf: the North Course, once upon a time the part of the property most forgot.

“You’re right; it doesn’t have the notoriety the South Course does,” Torrey Pines superintendent Rich McIntosh agreed after hearing an assessment that The North might be one of golf’s most under-appreciated courses. “It’s always been the little brother or the golf course that was just there. If you couldn’t get on the South Course, then you went and played the North.”

Not anymore. Certainly not since 2016, when it kicked to the curb its reputation as the easier layout following a $12.6 million redesign led by 16-time PGA Tour winner Tom Weiskopf.

The North Course, which debuted at No. 93 in 2019 in Golf Digest’s list of America’s Top 100 Public Courses, was significantly busier than the South Course (No. 36) on the two December days (four days apart) I managed to score matching 11:30 a.m. tee times. That was as much a nod to the lower green fees on the North Course as it was the fact Torrey Pines, like public golf courses everywhere since the start of the COVID-19 pandemic, has never been busier on both sides of its modest clubhouse as it gets set to spend 2021 in the professional golf limelight. “We had Tom Weiskopf redo the course, but we didn’t really want another South Course that was a U.S. Open-caliber test of golf,” said Scott Bentley, interim deputy director for the city of San Diego’s golf division.

“We wanted a really good course that was more playable for the average golfer. As a bucket-list course, with the remodel Weiskopf did, we were able to crack the Top 100 in Golf Digest, and that’s quite a feather in our cap for the North Course.

“It has always probably had better views than the South Course. It’s a little bit lower, a little closer to the ocean. It has a state park on the north side, which has some incredible views with Torrey Pines State (Reserve). We are seeing a lot of play on the North Course. It’s actually preferred by our resident (golfers). It’s a little more player-friendly on a day-to-day basis.” 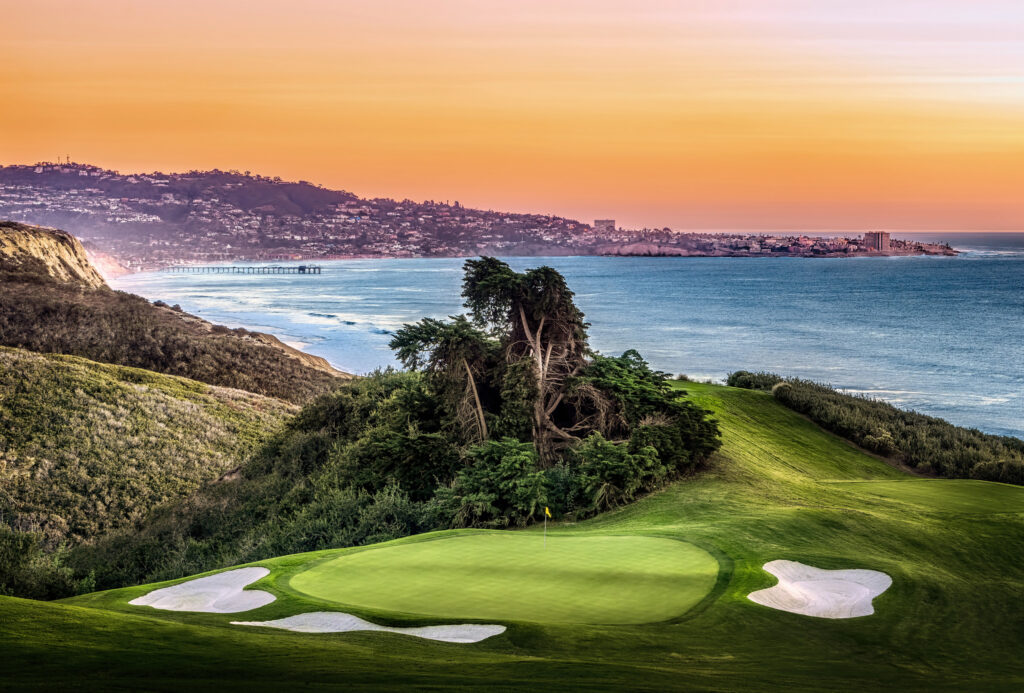 The par-3 15th of the North Course offers spectacular views of the Pacific and overlooks nearby La Jolla.

ROUGHING IT IN STYLE

Bentley chuckled when he tossed around the phrase “player-friendly” in December because all it takes is one wayward drive for golfers to understand why Torrey Pines is such a revered muni.

“Let people know that if they want a real championship experience, come in late December and early January,” Bentley said. “You experience what the pros experience.”

More often than not, the absence of pleasure in that experience will be felt in the wrists.

At Torrey Pines, McIntosh and his crew overseeded the warm-weather kikuyu grass with ryegrass that will better withstand the region’s sub-50 overnight temperatures in the winter. The result is a stiff penalty for missing fairways, which are cut just 25-30 yards wide for The Farmers.

“You can compare it to Riviera,” McIntosh said of the Los Angeles-area country club that annually hosts the PGA Tour’s Genesis Invitational a few weeks after The Farmers. “Riviera’s rough is dependent on what kind of winter they’re having. If it’s really cold, they’re going to have a less penal rough. At Torrey, it’s one of our biggest defenses so overseeding with ryegrasses allows us to get that density and that thick rough that will act as somewhat of a penalty. … That kikuyu is, if not more penal, it’s thick. It grabs your club like Bermuda (grass) does. With that being the base for the rye overseed, it’ll grab your ball if it drops down to the bottom and makes that ryegrass rough definitely more difficult than what you experience in (the upper Midwest).”

Still, it’s no less penal on the North Course than it is on the South. So what makes the latter the layout worthy of hosting a U.S. Open while the former will host a makeshift driving range during the event?

“It’s mostly the 500 or 600 yards that the South Course stretches back to,” Bentley said. “It has more than double the bunkers. The shape of the greens, they’re not quite as accessible as the North Course. The South Course greens, most of them are elevated quite a bit so shots that don’t land on a green end up in a bunker or they bounce further away from the green.”

McIntosh said: “The South has the teeth. It’s a difficult golf course.” 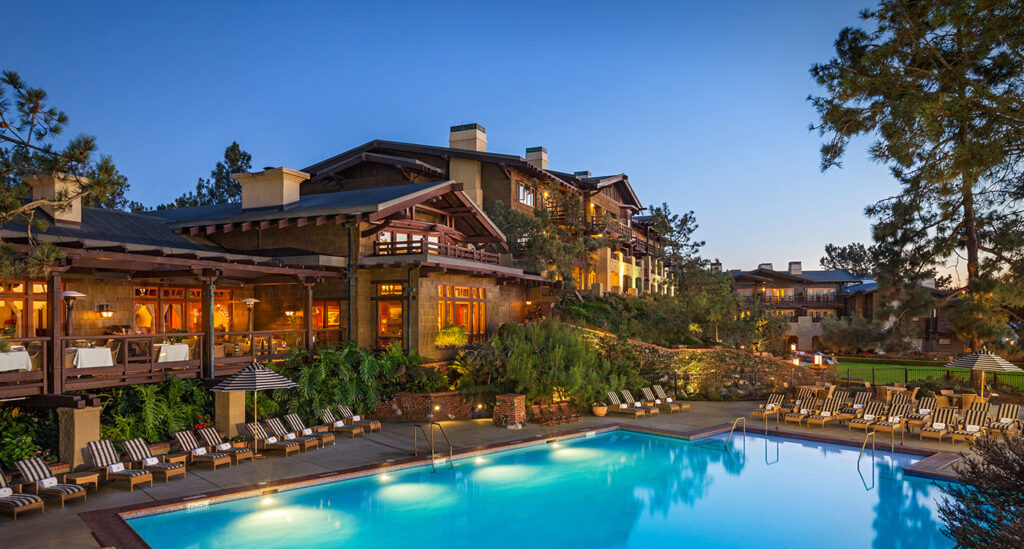 Like the course it overlooks, the lavish Lodge at Torrey Pines offers unbeatable views of the Pacific, along with the AAA Five Diamond excellence you’d expect.

It’s been that way since the facility opened in 1957 on the coastline property that was once home to Camp Callan, a U.S. Army anti-aircraft artillery replacement base during World War II.

Torrey Pines became home to what is now the Farmers Insurance Open in 1968 when singer Andy Williams started hosting the event. Weiskopf posted his first PGA Tour victory that year and led a list of champions at Torrey Pines that has included Jack Nicklaus, Tom Watson (twice), Phil Mickelson (three times) and Woods, who has won a remarkable seven titles there.

“I always have enjoyed coming here to Torrey Pines,” Woods, who also won the Optimist Junior World Championship there as a 15-year-old in 1991, said before last year’s Farmers. “(I) played here in junior golf and played well here as a professional. My dad brought me down here when it was the old Andy Williams, so it’s been near and dear to my heart for a number of years.”

Based on the traffic it sees each year, others share the same fondness for Torrey Pines.

In an average year, McIntosh said, more than 85,000 rounds are played on the North Course while the South Course sees about 70,000 rounds. In 2020, Bentley said, the percentage of resident to non-resident rounds jumped from 70-30 to 80-20 as city golfers took advantage of generous resident rates to practice social distancing against one of golf’s best backdrops.

That doesn’t include the $45 non-resident booking fee I paid for the chance to reserve a tee time more than three days in advance.

On the day this story was written (a Friday), there were no tee times available in the three- day window on either course, but openings in 14 tee times on the South Course and 11 on the North Course over the ensuing seven- day window.

“Once we received word we were going to receive the (2008 U.S.) Open, things really changed for the golf course,” Bentley said. “Our target market, knowing that we were going to have the Open, it just kind of elevated everything. We’ve completely revamped what our daily course maintenance is and the product we put out there every day is on a high scale, especially for a municipal course. I feel we are right up there with anybody in how we maintain the courses.”

“It’s impressive what they do to get it to that level,” Harmatys said of the city of San Diego, which brings superintendents from around the country for tournament week and sets a high maintenance bar for the year around the PGA Tour event. “They set up the North Course and South Course the same – how they’re doing the greens, how they’re mowing the rough. And the North (Course) has come a long way since the Weiskopf (redesign). Players used to look at it as a secondary course they had to play when they came to Torrey Pines. Since all that took place, there’s nothing but compliments. People are excited and happy to play the North Course.”

It might be a bit of a challenge to play either course until late this fall.

The course closed Jan. 13 – Feb. 1, the day after the final round of The Farmers, with preparations for the U.S. Open beginning on Feb. 5, according to Bentley. It remains to be seen how long the North Course will remain open.

“We’ll still have 18 holes (open) for a while,” he said. “Not knowing yet what the build is going to be like for the U.S. Open and what space they’re going to need on the North Course with the pandemic, we’re not sure when it’s going to close down. We’re going to try our best to keep 18 holes open. When they do start needing to use some of the holes on the North, we’ll go down to nine holes at some point and then close. We’re not sure what the timing is on that yet.”

Likewise, Bentley said, the business of running a municipal golf course might not return to normal until September. Even then, with the annual overseeding of the North Course scheduled for early October, it could be November before all 36 holes at Torrey Pines are ready for play.

“It’s going to be sometime around Thanksgiving before we have everything back in shape and (can) present a great product on both courses,” said Bentley, who knows the exposure Torrey Pines will get is worth the wait. “It’s extremely important. To be able to have a PGA Tour event, is really a feather in the city’s cap. And now to have our second U.S. Open, it keeps San Diego at the forefront as a great place to go, a great place to vacation and a great place to play golf.”