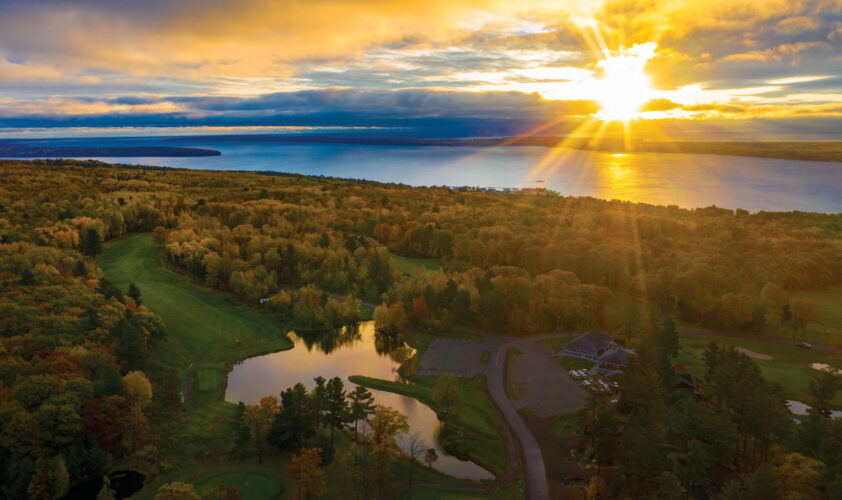 Good golf, even great golf, can be found in lots of places, from the sandy center of Nebraska to rugged coastlines east and west. But for superior golf? Or more correctly, Superior golf?

For that you must make your way to Wisconsin’s northern rim, where nearly two dozen islands dot the speckled water of the greatest Great Lake like leafy green jewels. Here you will find two courses, one an island layout designed by one of the game’s greatest architects, the other high on the mainland in a setting of such splendid scenery that a for- mer governor has called it the “Pebble Beach of the North.”

And wasn’t it no less than Robert Louis Stevenson who called the first Pebble Beach “the most felicitous meeting of land and sea?”

It is the same thing here. Superior golf, indeed. 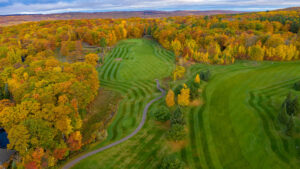 Maybe a personal story will underline the point. Twenty years ago this summer I want- ed to mark my 50th birthday with a long day of golf in the place I loved most. So at 7 a.m. on July 25 I teed off at Apostle Highlands Golf Course in Bayfield, walking but with my clubs on a cart driven by my wife. We played 18 holes, reclaimed the first tee and played seven more.

We then made our way downtown, bought sandwiches at the deli and boarded the Madeline Island Ferry for the two-mile, 20-minute crossing to the village of La Pointe, where we had a second tee time at Madeline Island Golf Club, a one-of-a-kind Robert Trent Jones Sr. design with seven double greens the size of Rhode Island to hold both front and back nine pins.

Still walking, and with my wife still serving as cart caddie, I again played 25 holes for a total of 50 on my 50th. We checked in to a lovely bed and breakfast inn, soaked sore muscles in a hot tub and watched an amazing lightning show over Lake Superior that the biggest fireworks show could only envy.

Such sky-born pyrotechnics can’t be guaranteed, of course, but the golf will be dependably memorable.

A History of Beauty

Madeline Island, the largest of 22 islands that make up the Apostle Islands archipelago, is one of Wisconsin’s most historic places. Once it was home, and still is a sacred place, to the Ojibwe people and later served as the center of the fur trade in northern Wisconsin. Like so many northern places, it was logged off during the timber boom and needed time to regrow its forests, but eventually it became a popular warm-weather playground for sum- mer-home owners, sailors, campers and day visitors who bicycle to the beckoning beaches at Big Bay Town Park or Big Bay State Park. Because it has a small community of several hundred year-round residents, Madeline is the only island that is not part of the Apostle Islands National Lakeshore, much of which is managed as wilderness to the delight of campers and kayakers.

Golf was added to the island’s many offerings in the 1960s, when developer and island lover Ted Gary brought in Robert Trent Jones Sr. to design what he envisioned as a top-notch golf course that would put Madeline Island on the country’s golf map. So over-the-top were his expectations that when Jones’ work was done, Gary declared the famous designer “had outdone himself ” and hosted a lavish grand opening that included an orchestra flown in from New York, bagpipers to lend a Scottish feel, fresh lobster brought in from Maine (Lake Superior’s popular whitefish apparently were viewed as not up to the occasion) and even a 57-foot yacht to house guests.

Gary’s grand dream of a teeming golf course community and destination course was never fully realized — blame the course’s location on an island far from population centers as part of the reason, but credit that same unmatched location on winsome Madeline Island and Jones’ innovative design as reasons more golfers bearing clubs should board that ferry.

Jones’ design is often referred to as a “double nine,” with parallel fairways for the front and back nines leading to the double greens, where red pins are used for the front nine and white for the back. More than a few golfers have delighted in shots that landed near the hole, only to remember they should have been aiming at another flag a near-world away on the same green. That’s only a slight exaggeration; the fourth green is 59 yards wide — and it isn’t even the biggest on the course.

The design allowed Jones to create 18 holes on a limited amount of land. For ex- ample, the second hole is just 109 yards over a pond to a flag on the left side of the double green. From a nearby tee box the 11th hole plays longer but over the same pond to a pin on the right side of the green.

Even where there are separate greens for front and back the layout is unique. The sixth and 15th holes share a tee box and fairway until it splits off into doglegs in opposite directions.

And, good for the golfer if not for the golf course’s coffers, Madeline Island Golf Club is seldom too busy to get on because visitors come by the thousands to sail, fish, swim, bike and lick ice cream cones from Grandpa Tony’s Restaurant downtown. As an area newspaper noted when it opened: “In most other locations the new golf course would be a singular attraction, but at Madeline it slips casually into a long list of attributes that have drawn people to the special atmosphere of the island for years.”

Remember our topic? The pond fronting the first tee at Apostle Islands Golf Course in Bayfield is a miniature Lake Superior. Often the blue tee is set squarely on the Bayfield peninsula, while the white tee represents the Keweenaw peninsula, about where you’ll find Houghton and Hancock, Michigan, in real life.

There’s no sign informing first-timers that the water hazard is actually a mini-great lake but those who miss the homage aren’t entirely losing out. Over the course of their round they’ll see Lake Superior — the Ojibwe called it gichi-gami, meaning “great sea” — from 13 of Apostle Highland’s 18 holes, a shimmering backdrop dotted with sailboats that is as pretty a setting for golf as any Wisconsin course can boast.

The course opened with nine holes in 1990 when the then-owner was looking for a way to erase the scarred landscape left behind when the hilltop site, 500 feet above Lake Superior, had been logged off. Course designer Bill Korpella came up with the routing, and with the idea of the replica Great Lake pond. Nine additional holes were added in the mid ’90s, creating a course with unmatched views of Lake Superior and the Apostle Islands and even Michigan’s Porcupine Mountains in the Upper Peninsula.

The lake first appears on the par-4 third hole, where the fairway seemingly falls away into the water in the distance. It might be the most photographed golf hole in the north and, during race week when dozens of colorful sailboats jockey for position in the distance, it rewards players with one of the prettiest distractions in golf.

For many scenery-struck visitors to Apostle Highlands, a camera serves as a 15th club. The course is not long — just 6,332 yards from the longest tees and under 6,000 from the whites — but serious elevation changes and woods lining the borders of many fair- ways often overwhelm big hitters who look at the scorecard’s modest numbers and try to conquer it with power. It is a course that demands placement over length, and new- comers who head out to play without being informed that all putts break toward the lake will be left muttering over putts that do just that, even when it seems obvious they don’t. 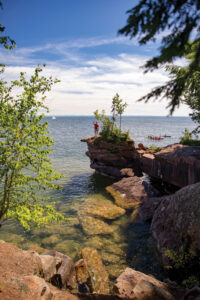 Some holes play shorter because they feed downhill toward the lake; others, despite stretching just over 300 yards, can feel twice as long because they play uphill, away from the lake. Some days the par-4 15th can feel like the longest 310-yard hole in golf, but that’s OK. If your second shot misses the small, two-tiered green just turn around and savor the gorgeous view of Madeline Island in the distance.

For good reason, many of the benches at Apostle Highlands face away from play.

The course has a small but loyal group of local players but, given its setting in one of Wisconsin’s most popular summer play- grounds, gets a lot of tourist play, as well. Many squeeze in a round before taking the sunset cruise around the Apostle Islands or riding the ferry to Madeline Island. In fall, when Bayfield’s many orchards lure thousands of visitors to pick apples, the stunning views from Apostle Highlands are only enhanced by the trees blushing red and gold at water’s edge.

That’s the same spectacular view offered from the clubhouse bar’s two-sided deck, where you are reminded that where you are often matters more than what you are doing, even if that is golf. 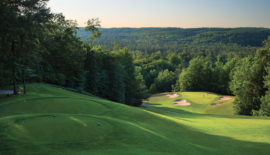 Summer 2020 | Gaylord is now considered one of the top destinations for golf in the country.