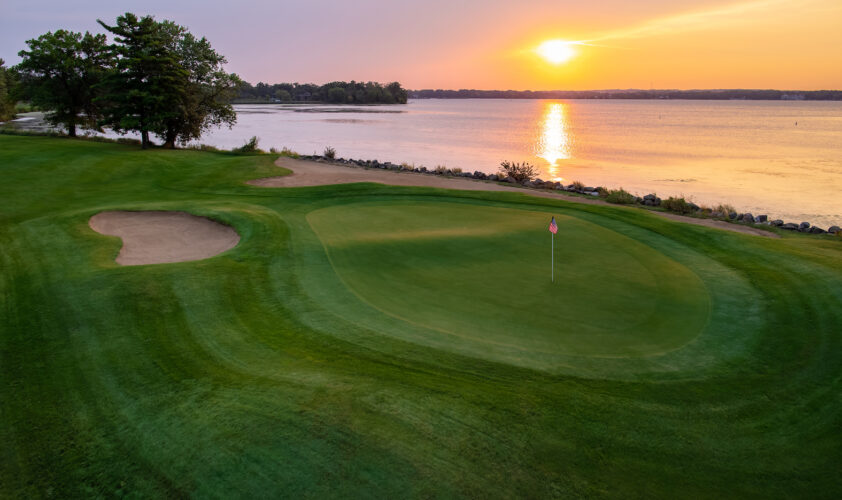 DELAVAN, Wisconsin — Many golf resorts claim a colorful history, and some do have stories to tell. But how many of those stories date to the early Mound Builders, and feature a band of later Indian residents led by Chief Big Foot, whose name still graces a high school and country club? Or tell of wintering circuses that included clowns and elephants named Romeo (who killed five handlers) and Juliet, the invention of pink lemonade, dancing to the biggest of the big bands, and a long succession of owners over its 140 years, including one group of Chicago men who muscled their way into control bearing slot machines?

Yes, Lake Lawn Resort, which boasts two miles of Delavan Lake shoreline in southern Wisconsin’s Walworth County, has a colorful past worthy of one of the nation’s longest- running getaway retreats. As Dick Gifford, Lake Lawn’s concierge and unofficial historian put it, “This place has probably the most unique history of any resort in the area.”

Or, likely, far beyond. Lake Lawn, in concert with the local historical society, is in the early stages of exploring the creation of a museum of the resort’s history, said Eileen Cole, sales and marketing director.

The resort has undergone many changes since it opened as a guesthouse in 1878, but its mission remains the same — offering recreation and relaxation to generations of visitors, especially from the Windy City just a short drive away.

“Chicagoland provided the bulk of the guests in the early years,” Gifford said. “We’re an hour and a half, two hours most, from even the south side of Chicago. Chicago families have been coming here for years and years.” 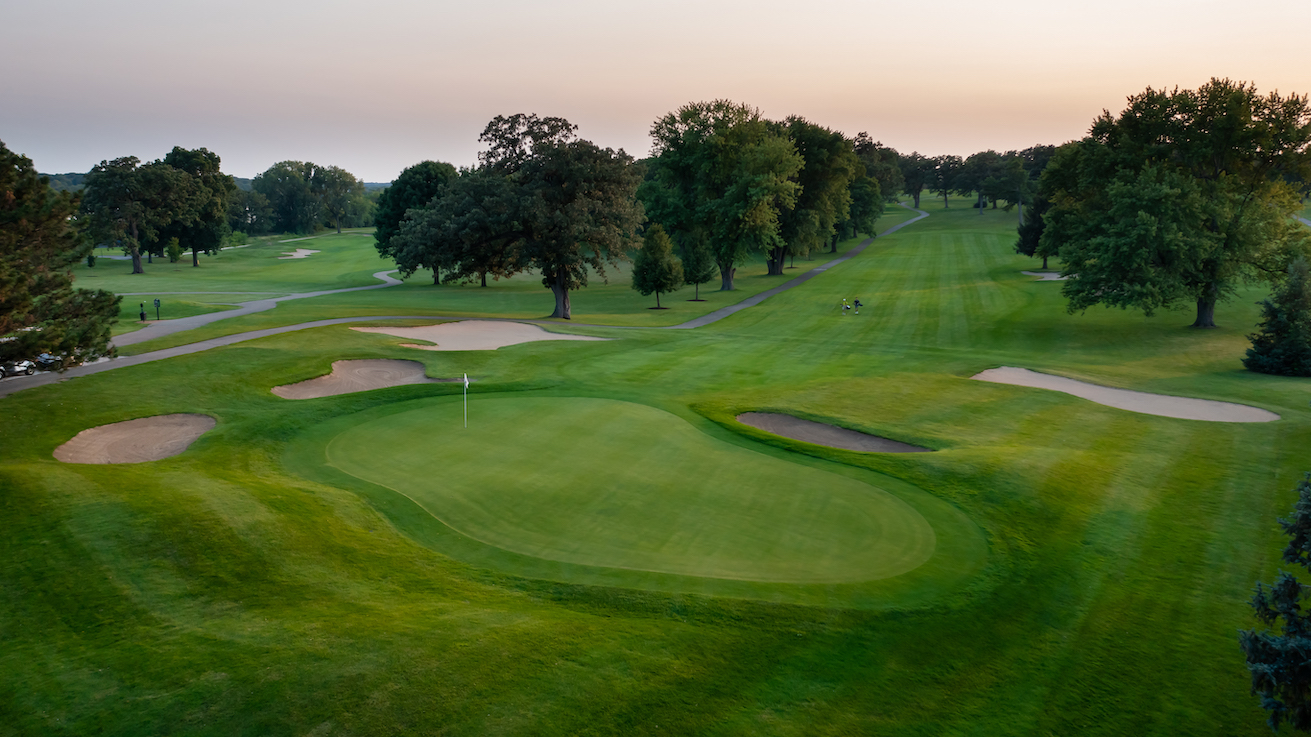 Delavan Lake is not as well-known as nearby Geneva Lake, famed for its ring of historic mansions built primarily by wealthy Chicago industrialists, but has long been a playground for visitors who want to fish and swim and enjoy all manner of watercraft. As Gifford said, “The lake is our asset, and we’re the lake’s asset.”

But recreation on land is big, too. Lake Lawn opened its first nine holes of golf in 1926 and added nine more in 1929. In 1989, the course was renovated by Dick Nugent, who also designed Kemper Lakes in Chicago and who used famous holes at Pebble Beach as inspiration for redoing Lake Lawn’s greens. The course, now called Majestic Oaks, indeed boasts many impressive oak trees (not always so “majestic” when they are blocking your shot), well-bunkered, undulating greens and, given its presence on Delavan Lake, scenery that doesn’t quit. 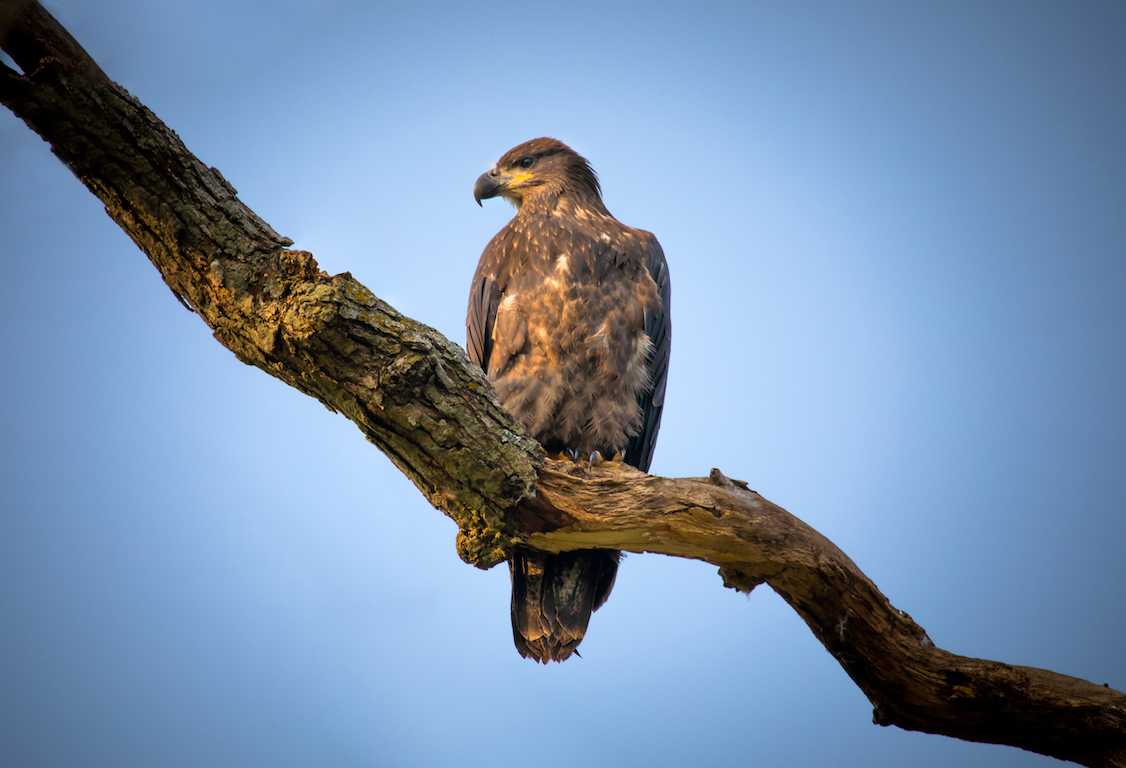 A rare photo of a juvenile bald eagle, perched near the family’s nest alongside the 18th hole. Photo by Nile Young Jr.

If first-timers ask what to expect, Thomas Howe Jr., director of golf at Majestic Oaks, says, “It is a sporty course with very fun green complexes, and being lakeside it’s very pretty. It’s a lot of fun. It’s tree-lined (but) it has quite a bit of character to it.”

Oh, thanks to a nesting pair of feathered residents near the 18th hole, eagles are available even for the least skilled players. One of the perks of Howe’s job, he said, is “I get to watch these bald eagles. They’ve had five babies since we’ve been here.”

The first inhabitants of the Delavan Lake area were part of the Woodland Indians who arrived as early as 1800-2000 B.C. Mound Builders who occupied the land between 500- 1000 A.D. left as evidence of their existence 100 or more effigy mounds around Delavan Lake, with the heaviest concentration on what later became the Lake Lawn site. Most of those were disrupted by later development but a handful of mounds, now permanently protected, remain on resort property.

From about 1770 through 1836, Potawatomi Indians, including Chief Big Foot, had a small camp on the Lake Lawn property along with their main village in Fontana, which explains Big Foot High School in Walworth, Big Foot Country Club in Fontana and a statue in Fontana depicting the chief’s last look at Geneva Lake before his people were relocated. 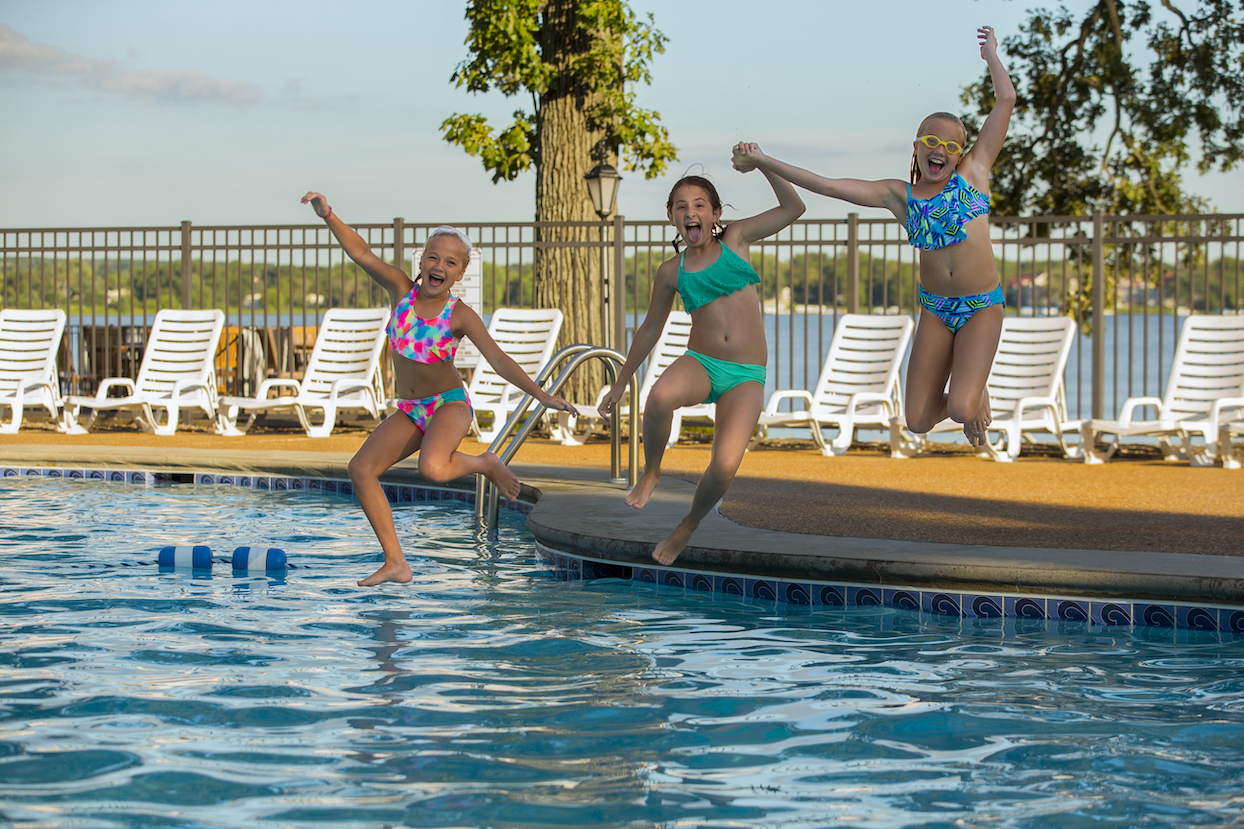 Lake Lawn has offered family-friendly fun for more than 100 years.

In the 1840s the land where the resort now stands was purchased by Edmond and Jeremiah Mabie as winter quarters for their U.S. Olympic Circus, the first of dozens of circuses that spent time in the area over several decades and gave Delavan a rich circus history that is still celebrated today. Despite his reputation as a killer of men, which hardly kept the curious from lining up to see him, the notorious Romeo elephant is remembered by a life-sized statue in downtown Delavan.

Juliet, in her defense, was a far more docile pachyderm known for pulling the bandwagon in the circus parade. When she died in February 1864 she could not be buried because the ground was frozen so the circus decided to drag her onto the surface of the lake, where a hole was cut to drop her through the ice. Just another circus legend, a skeptic might suggest, but in 1931 a bone fragment found in the lake was determined by Chicago’s Field Museum to be the bone of an Indian elephant. Juliet, of course.

One other circus legend involved Mabie Brothers clown Pete Conklin, who wanted to make lemonade in a vessel he borrowed from an equestrian who had just dyed her tights bright red in it. So, it’s Conklin we thank for pink lemonade.

What is now a 270-room modern and amenity-rich resort opened much more modestly as a small, two-story frame hotel operated by Manie Mabie. But over the years new owners expanded the resort to include cabins, more lodging, dining facilities and more amenities, including golf. At one time Commonwealth Edison purchased the resort for use by its employees. Not by coincidence, Lake Lawn was one of the first in the area to boast electric lights.

During the big band era, Commonwealth Edison built a ballroom at Lake Lawn Lodge, as it was then known, that was the center of an active lakeshore ballroom scene. Entertainers included some of the biggest names in the musical game, from Lawrence Welk and his band to Joe Smothers and the Original Carolina Nighthawks, a 10-piece orchestra that traveled the world. In later years as musical tastes changed, performers included Bill Haley and his Comets and, in the 1970s, The Hollies.

In 1936 Lake Lawn was purchased from Commonwealth Edison by George W. Borg, known as “Mr. Clutch” after being credited with inventing the automobile clutch. Borg opened the resort to the public as well as to his employees but later sold the resort after declining to get involved with unsavory Chicago residents who brought with them illegal slot machines. A short time later, slot machines were banned for good.

What followed was a procession of different owners who continued to expand the resort and its offerings, including a 22-acre airstrip for private planes and more amenities. An outdoor pool was added in 1988, its marina was expanded and the resort became known as a place for weddings, conferences and many family reunions. In 2010 the resort closed when its then-owners ran into financial difficulty but was purchased by a new group of investors in 2011 who have continued to upgrade facilities and amenities.

Even a worldwide pandemic was but a blip for Lake Lawn, Cole said, who pointed out recreation was possible even with strong safety protocols in place.

“It’s not affecting business,” she said. “It’s better than ever. It’s an outside resort … we’re a recreation place. It bodes well for people who are trying to stay safe. All the activities have really boomed this year. Golf, oh my, golf has been going crazy.”

That was certainly the case in 2020, Howe said, in part because Illinois kept its courses closed after Wisconsin courses were allowed to reopen and golfers poured across the state line with clubs in hand. Strong play continued in 2021. Majestic Oaks is part of a golf trail that includes top courses in the

Other activities available to area visitors include Lake Geneva Cruise Line tours that take in the lake’s historic estates and cruises on Delavan Lake aboard the Lake Lawn Queen, a 76-foot, two-level cruise boat with an open-air deck for spectacular views. Tours include glimpses of five Frank Lloyd Wright homes and other historical landmarks on Delavan Lake and sometimes include live entertainment.

The truly adventurous can just take a hike. The 21-mile Geneva Lake is ringed by a shore path that is open to walkers who want up-close-and-personal looks at historic mansions. It can be walked in one long day or broken up into segments for more manageable walks.