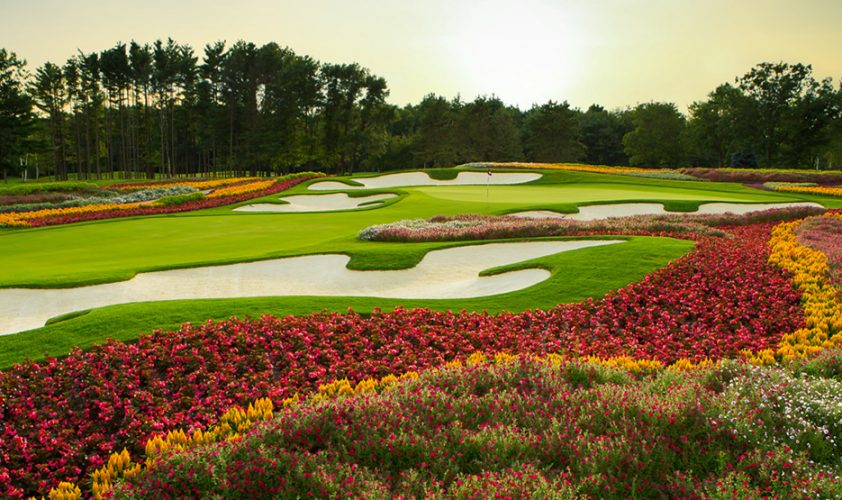 STEVENS POINT, WISCONSIN — Long it has slumbered, patiently waiting its time to shine once again, to showcase its renewed beauty to the golfing masses clamoring to see it at last.

Like the thousands of flowers adorning its signature 16th hole, SentryWorld Golf Course is finally back in bloom — and better than ever before. 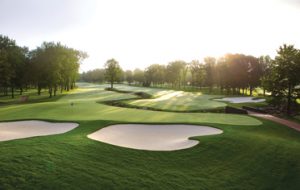 SentryWorld Golf Course, the classic, Robert Trent Jones, Jr.-designed gem in the heart of Wisconsin, was at the top of the game in the Great Lakes when it originally opened in 1982 — in the days before Whistling Straits, Erin Hills or others. As with all things, the bloom slowly came off the rose, and the masses migrated to newer, greener pastures.

But SentryWorld, which is owned by 110-year-old corporate titan Sentry Insurance, never fell out of favor amongst its ownership, or the community it called home. So in 2012, the company brought Jones and his team back where they began 30 years before, to return the course to its glory, and its rightful place among the Midwest’s best.

After an extensive, 20-month renovation to the entire facility — from tee to green, to the restaurant and banquet center — SentryWorld is finally ready to shine once again, with a grand re-opening ready for this spring. The golf world has noticed, too. Golf Digest named SentryWorld the No. 5 best course in Wisconsin, up from No. 10 last year. GOLF Magazine named it No. 2 on its list of Most Anticipated New Courses of 2015. 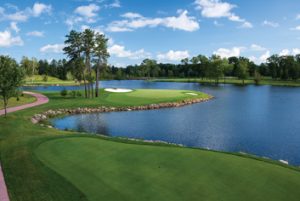 The brand-new, par-3 12th hole offers a look at a never-before-seen part of the property at SentryWorld. Photo by Nile Young, Jr.

James should know. The Stevens Point native got his start at the club in the 1980s, working in the cart barn as a high schooler, before heading off to find his fortune in the golf industry. After time at one of the nation’s premier clubs, The Resort at Glade Springs in West Virginia — the sister resort to The Greenbrier, James came home last spring to help return his home course to greatness.

“I learned to play golf at SentryWorld, that was the first time I’d ever played,” James recalled. “I can honestly say this golf course has exceeded my expectations. I always loved the original design — but the use of the new property, and the enhanced shot selection, it just is a more fun golf course. What’s also exceeded my expectations, honestly, is the conditions that the golf course is kept. There’s a real commitment to being exceptional.”

Now, as the course gets set for its official reopening in 2015, it’s clear that “exceptional” is simply the rule at SentryWorld.

The list of improvements, however, is without exception. From the start, SentryWorld’s renovation was designed to make it bigger and better — 300 yards were added to stretch it to nearly 7,250 — and the company clearly spared no expense in returning it to greatness. The club brought back RTJ Jr. to advise on the project, with on-site oversight and management by Jay Blasi and Bruce Charlton, Jones Jr.’s right-hand man since the mid-80s.

But while many clubs focus on making their tracks more fearsome, SentryWorld sought to enhance the experience for its visitors. Jones & Co. refined a lot of the rough edges that had crept into the course, but also softened the harder edges, too. A few hundred lucky golfers got a sneak peek at the renovations in August of 2014, as the club raffled off rounds to benefit local charities. The early reviews, not surprisingly, have been raves.

“People have generally felt like the golf course is more playable,” James said. “The new SentryWorld course allows for a lot more shots to approach the green. Instead of an aerial game, you really can run or bump it in. A new feature is the ‘kicker slope.’ If you mis-hit it to the left a little bit, the ball will kick it back onto the green. Robert Trent Jones really likes that feature.”

Jones and team also slimmed down the contours of the greens, which after three decades of topdressing, had become too severe to allow for speed today’s golfers are accustomed to, James said.

OUT WITH THE OLD

While much of SentryWorld’s renovations focused on refining Jones Jr.’s original creation, returning to the site also afforded the architect the chance to improve on the original routing. Sentry even opened up areas of the property that had never been used before, giving Jones an even broader canvas to work with.

The shining example of that is the newly created par-3 12th hole, a dramatic 161 yards over a large lake to a peninsula green, more than a little reminiscent of Sawgrass. But Jones didn’t stop there — and used the lake and new land to create a special section of the course, unseen or unplayed ever before.

Following the new 12th hole, the par-4 13th became the lucky recipient of a much- needed redesign, bringing the lake into play in a much fairer way. Add in the 575-yard, par-5 14th, and you’ve got maybe the stron- gest stretch of golf on the course.

SentryWorld’s course isn’t the only aspect getting a much-needed renovation, however. The company examined its golf operations from every angle, and quickly realized it needed to update the entire sports complex facility to the world-class level of the course.

“The initial project was to renovate the golf course, and to leave the sports complex alone,” James explained. “Then the conversation was, ‘We’ve got this beautiful golf course, and they’re going to walk into this complex that looks tired.’”

So Sentry did the difficult thing: they decided to renovate the entire complex, including the field house, six tennis courts, restaurant and banquet center.

“There’s new everything in the field house,” James said. “And we took the old restaurant, The Sport Plate, and recreated it to what we call PJ’s–SentryWorld. It’s named after a gentleman named PJ Jacobs, who was responsible for moving Sentry from Berlin, Wisconsin to Stevens Point. Mr. Jacobs was also very involved in the community in Stevens Point. My kids even go to PJ Jacobs School!

“In addition, we have a wonderful ban- quet facility for weddings and other events. It’s just a really beautiful setting, and we’re having a lot of success with it.”

Of course, success is subjective, and James says ultimately SentryWorld is about giving back to the community it calls home.

“Success certainly is rising up the ranks up the Golf Digest/Golfweek rankings, we can measure some success on those,” he said. “But we’ll measure success by the look on

people’s faces when they come off 18. Know- ing they had a great experience, on a great golf course, that it was in great condition, and that the staff helped make the experience that much better. That’s success.”