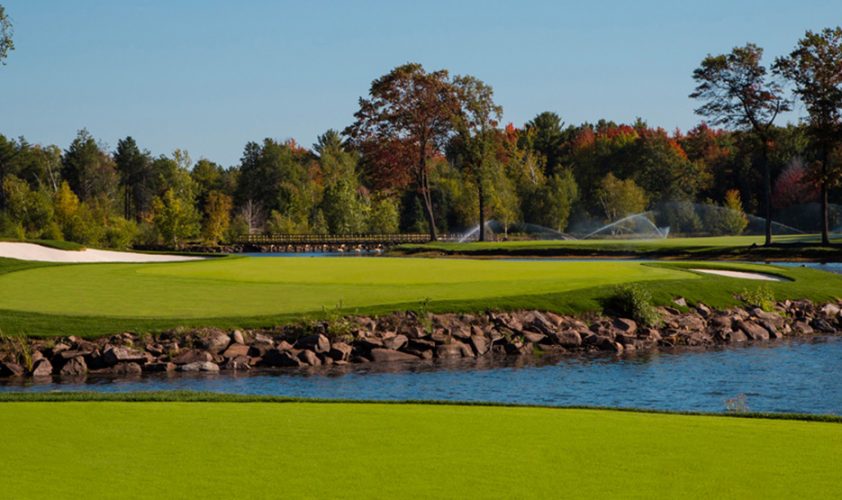 STEVENS POINT, Wisconsin — There are restorations, there are reno- vations, and there are redesigns. Then there are projects like the stunning SentryWorld, which can only be accu- rately described in one word:

The classic, Robert Trent Jones, Jr.-designed gem was the pride of Wisconsin when it originally opened in 1982 — in the days before Whistling Straits or The Bull, Erin Hills or others. Over time, the parkland layout slowly began losing some luster. But the course, which is owned by 110-year-old corporate titan Sentry Insurance, wasn’t an afterthought to the company — it was a great, green amenity for its employees and community. And it would be returned to glory. 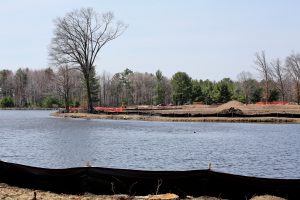 TOP: The new & improved 13th hole at SentryWorld, which now has a 200-yard carry off the tee to a wide fairway. ABOVE: The hole  required some major construction, including the addition of a new bridge.

“It’s a campus improvement project, and a recruiting project,” marveled longtime Director of Golf Brian Dumler. “Management thought, if we improve our campus, we can recruit better employees from out of town. Had nothing to do with tournaments or ratings or anything. It was about improvement/ recruitment.”

And it’s already working. To find proof, they need look no further than their new General Manager, Mike James, a Stevens Point native who returned to his hometown club after more than 20 years away. James fell in love with the course and the game while working in the cart barn in high school. He even- tually became a PGA professional and moved away, but now returns to Stevens Point after a stint at The Resort at Glade Springs in West Virginia — the sister resort to The Greenbrier.

“One of the main things I heard from the top, from Peter McPartland, our CEO, is that this is for the community of Stevens Point,” James said. “This is the vision of SentryWorld from its inception. They wanted to give something back to the community. Obviously some of this was built for corporate usage and enter- taining clients, but really, the main driver was to give back to this community.” 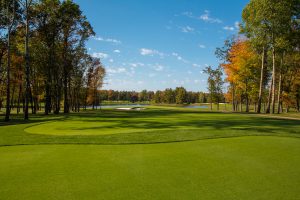 And what a great gift it certainly is. The list of improvements is almost as long as the course itself — 300 yards were added to stretch it to nearly 7,250 — and the company clearly spared no expense in returning it to greatness. The club brought back RTJ Jr. to advise on the project, with on-site oversight and management by Jay Blasi and Bruce Charlton, Jones Jr.’s right-hand man since the mid-80s.

And then to come back and to see it like it is now … It’s still the same flavor, they’ve restored a lot of that, but there’s some holes out here that are so new, it’s like you’re in a different place. It’s a really unique combination.”

And in a refreshing take on golf course design, the new-and-improved SentryWorld pays special attention to those who will play it most: the average golfer.

“We added almost 300 yards from the tips,” Dumler said, “but it’s actually a little shorter from the forward tees. And it plays a little easier from every tee but the back tee, as far as rating and slope. The fairways are a little wider, little more forgiving.

“We definitely wanted to make it more playable for average golfer, and more challenging for the scratch golfer. We wanted to increase the fun-factor, and just upgrade all the structure — the irrigation, new grasses, new sand — making it a little more maintenance-friendly, too.”

SentryWorld now has all new carts with GPS, and all new concrete cart paths for them to drive on. There are new holes — you’ll salivate at the downhill par-3 third — and the nines have been reordered, closer to the original routing. It has wider fairways and fewer trees, completely new tees, and the greens got a little extra TLC in the redesign, Dumler said.

“The greens now have a lot of fairway runoff, which is kind of the theme for the new design,” he explained. “This fairway runoff is something new to SentryWorld. This used to be all rough, but now you have options around the green. The good player is going to say, ‘Am I going to putt it, am I going to chip it, hybrid?’ But the once-a-month player probably just grabs a putter and it’s quick decision.

“A lot of the greens have that runoff slope to them. The previous design had a lot of two-levels, big drops. Now they’re a lot more subtle, so we’re going to speed ’em up a bit, too.”

Perhaps most striking is the bunkering, where SentryWorld applied the “addition-by-subtraction” to stunning result.

“We reshaped these bunkers, made them a little shallower, a little bit more playable, and we took some out — 30% less bunkers than there was in years past,” James said. “We’ve also improved the drainage. These have the Better Billy Bunker system, the only one in Wisconsin. It was designed by the superintendent of Augusta National, I believe.”

In an inspired move, SentryWorld has also remade all the bunkers with brilliant white limestone sand from a quarry in Cleveland. With stunning white sand and classic design, Dumler said SentryWorld is setting itself apart in the now-crowded Wisconsin golf scene.

“We have gotten the white sand from Cleveland,” he said. “When we called the superintendents of Medinah and Butler, they both said the same thing. (The white sand) really makes a difference. When people drive by they say, ‘Man, look at that sand.’

“This is your classic parkland course. If you look at the other courses in Wisconsin, Erin Hills, Whistling Straits, the new one down here, Sand Valley … they’re all great courses, but they’re rough-looking. We have pretty.”

They do indeed have pretty. That, as its famous par-3 16th flower hole can at- test, might be the only thing at SentryWorld that hasn’t changed.