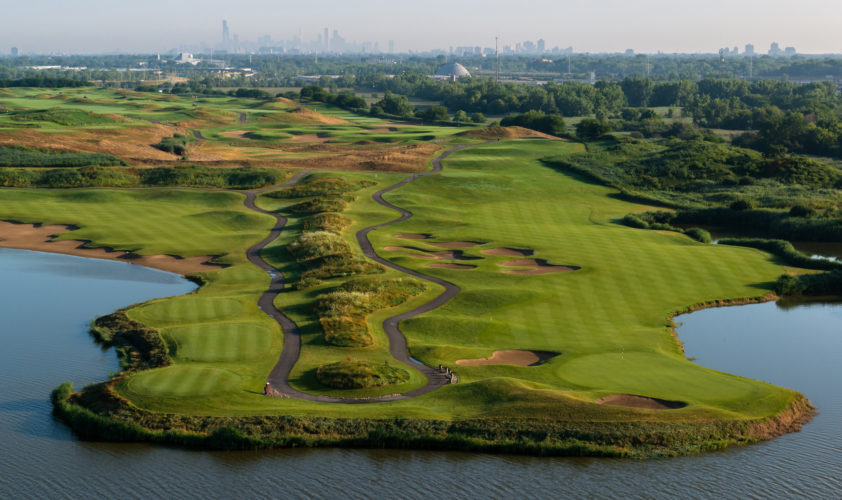 CHICAGO — Just eight miles south of the Chicago Loop and mere yards from the non-stop (and often stopped) traffic on Interstate 94, Harborside International Golf Center hides in plain sight, an oasis of superb public golf in the middle of the concrete jungle.

Getting there (especially during rush hour) can be a challenge, but when the golfer turns onto the long entrance drive off South Doty Avenue, the effect is calming. The death grip on the steering wheel relaxes, nerve endings rubbed raw by lane-jockeying are soothed and anxiousness gives way to anticipation as rumpled green turf comes into view.

The facility includes two well-conditioned 18-hole courses, Port and Starboard, that are basically mirror images of each other — faux links with challenging green complexes and wide, wind-swept fairways framed by fescue-topped mounds. From high points on the treeless terrain, golfers are treated to unencumbered views of Chicago’s impressive skyline to the north.

Both courses were designed by Dick Nugent. The Port opened in 1995 and the Starboard followed by one year.

Nugent, who died on Jan. 1, 2018 at 86, is one of the underappreciated golf course designers of the last 50 years. A Chicagoan and a protégé of Robert Bruce Harris, he partnered with Ken Killian before heading his own firm, which produced Bob Lohmann and Jim Engh, among others.

Harborside represents some of Nugent’s best work, especially considering the fact that the courses were built on a massive but featureless construction landfill. As was the case at Whistling Straits, Harborside was bulldozed into existence.

“They pushed a ton of dirt,” said general manager Brian Dutler. “Essentially, they brought all (the topsoil) in. It was a construction landfill so you’ve got a lot of cement, a lot of rebar, a lot of fill and who knows what else.” 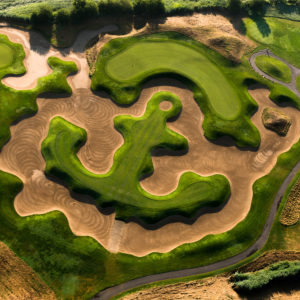 Harborside is advertised as a links experience and there are definitely some links characteristics, primarily ever-present wind, plentiful bunkers and the nearest tree being off property. It has the right look, but the turf is bentgrass and softer than the sand-based fescue found in Scotland and Ireland.

“There’s a little sand,” Dutler said, “but because of the landfill aspect side of this thing it doesn’t get the true links-style bounce and roll.”

Also, though Lake Michigan is close at hand, the nearest body of water actually is Lake Calumet, which comes into play on the closing holes of both the Port and Starboard. It’s not the ocean, but it will swallow errant shots just the same.

The Illinois International Port District owns the facility and it’s managed by KemperSports, so you know what you’re going to get: excellent playing conditions, attention to detail and top-notch service. Kemper isn’t shy about spending money on course improvements, and a $1.7-million renovation in 2017 addressed drainage and bunkers; 60 were removed, the rest re-done with new sand.

Superintendent Steve Kellerman also cut back the tall native grasses just outside the fairway corridors and on hillsides so that a golfer can miss a fairway by several yards and still have a reasonable recovery shot from bluegrass rough.

“We tried to make the golf course a little more playable and a little more strategic,” Dutler said. “On holes where there were five bunkers near a green, we got rid of two or three of them. The bunkers that were 50 to 60 yards from the green that the casual golfer finds himself in, we wanted to try to make the golf course a little bit more playable, so we took them out. But yet there are still a lot of bunkers out there and a lot of trouble to get into. It’s a challenge on both golf courses.”

Often at 36-hole facilities, one course is favored by golfers and thus gets heavier play, with the staff challenged to market the “lesser” course. That’s not the case at Harborside. Starboard was ranked 13th on Golfweek’s 2014 list of America’s Best Municipal Courses and Port was ranked 47th.

Other than the whimsical, par-3 “Anchor Hole” on Port, complete with a boomerang green fronted by an anchor-shaped fairway surrounded by sand, the courses are nearly interchangeable.

Thus, Dutler said, they are rarely separated by more than 1,000 rounds in a season.

“As far as playability and condition, there is no difference between the Port and Starboard,” he said. “You can ask 20 golfers out here and you’re going to have 10 who like Port and 10 who prefer Starboard. That’s nice to have in a 36-hole facility; that we do have two equally conditioned courses that are equally well thought of.

“Golfers definitely have a preference, but if they have to play the other golf course, they’re more than thrilled with that experience, too.”

The closing stretches on both courses get your attention, both for their aesthetics and the challenge they present when the wind is up, which is just about always.

The 425-yard, par-4 16th on Starboard is reminiscent of No. 8 at Whistling Straits. The well-designed hole turns slightly to the right along Lake Calumet, with a split fairway giving players an option off the tee. The wider plateau fairway to the left is easier to hit but presents a longer approach; the lower fairway on the right is narrow and brings the water into play, but leaves a shorter approach.

That hole is followed by a par 3 requiring a carry over water. My good round fell to ruins here as my tee shot ballooned in the wind and sailed short and right to a watery grave. The bailout left is no bargain, however, because three bunkers present a downhill shot to the green, with water beyond.

The 18th is a long par 5 that bends to the right, along the water.

The Port course has a similar strong closing stretch, with Lake Calumet bordering the par-4 16th and 17th holes and the par-5 18th. This time, though, the water is on the left.

Harborside draws mainly from Chicago’s south and southwest suburbs and also from the near north side. From the Loop, with no construction and manageable traffic, it’s just a 15-minute drive. The facility has a golf academy staffed by three instructors and also is utilized by The First Tee. The range and short-game practice areas are top-notch.

“We’re happy with the changes and modifications we’ve made and the relationship we have with the (Port District) that has allowed us to keep improving the facility,” Dutler said. “In the daily fee public space, there’s a lot of places that aren’t capable of doing that. With the conditions we provide and the experience that is provided to our guests, they want to keep coming back. That’s a great sign of how healthy the golf operation is.

“We’ve been here since 1995 but there’s still a ton of excitement and energy about the potential that this facility can still strive to be.”