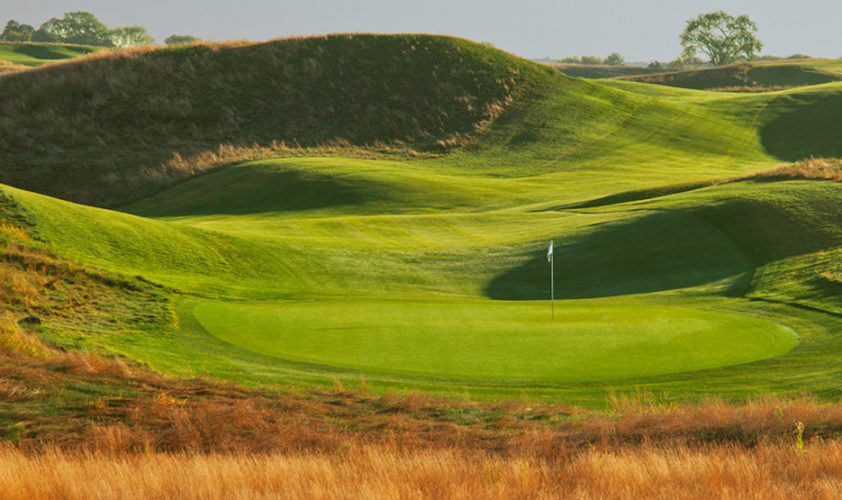 ERIN, Wisconsin — It was just two days after Martin Kaymer dusted the field and kissed the 2014 U.S. Open trophy, but all the talk afterward wasn’t about the German’s dominant performance. No, the consensus star of the show was the scruffy- looking, 7,565-yard Pinehurst No. 2.

We’d gathered at the site of the 2017 U.S. Open, the incredible Erin Hills, a Dr. Michael Hurdzan-Dana Fry-Ron Whitten design 30 minutes from Milwaukee, to discuss the Open’s recent past and not-so-distant future. But whereas Donald Ross’s masterpiece at Pinehurst received the Extreme Golf Makeover by Bill Coore and Ben Crenshaw, it’s clear Erin Hills will receive a mere nip and tuck here and there by comparison. But the comparison is still there. 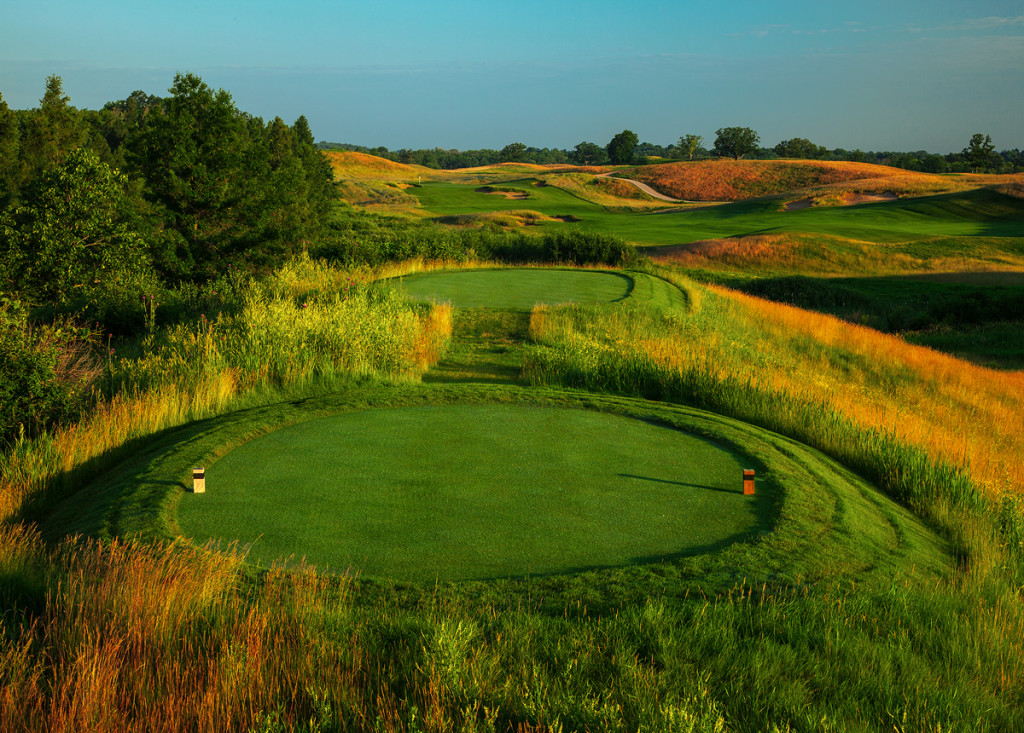 The new green complex (seen from the Black tee box) on the par-4 third hole at Erin Hills. The green complex, surround and approach were totally rebuilt between the 2013 and 2014 seasons. The green was moved to the north of its old location and lowereed a bit to allow run-up approach shots and provide more pin placements as compared to the old severly tiered green. Photo by Paul Hundley.

“Obviously watching the Open this past week, you probably heard the word sustainability a lot,” said Erin Hills superintendent Zach Reineking. “It’s kind of the buzzword in the golf industry, about courses being stewards of the environment and being sustainable. I think Erin Hills shares a lot of the same design philosophies as what Pinehurst does.”

There have been some tweaks to the course, of course, such as completely rebuilding the green at the 478-yard, par-4 third hole, and new tees at the 507- yard, par-4 fifth hole and 370-yard, par-4 15th. But the rest hasn’t changed all that much since the course opened in 2006 — except for the overall scope.

“Erin is of course an all fine fescue golf course, and started out to be an inex- pensive alternative to Whistling Straits,” Dr. Hurdzan told GolfTime in a previ- ous interview. “But then, as we started to work the land, and as the USGA got interested in it as a tournament venue, then it started to take on a little different proportions.

“When we started at Erin Hills, the idea was a modest golf course and then it grew a little bit. When we did that, first we found good green locations, and then we worked our way back to find good tee locations. And this was kind of the way Old Tom Morris used to lay out golf courses, you find the good green sites and then you figure out how do you want to play to them. Well, what happened at Erin Hills, and it was totally (accidental), every time you look over your shoulder, there was another tee site. So you’d kind of go, ‘Wow, how about a tee here? Or how about a tee there?’ So we just started building more and more tees on those golf holes. And the idea was you could have a golf hole, a par-5, that might play 580 yards one day and then 520 yards the next day. So the idea was to build as much flexibility into the golf course that we could.”

Over the past few years, Hurdzan and Co. have been tweaking the course here and there, and the architect said the USGA has been excellent partners to work with.

“The USGA has been really, really, really easy to work with,” he said. “(Executive Director) Mike Davis never asserts himself. We’d walk around and he’d say, ‘What do you think about this hole?’ And then he’d listen to what we thought. The USGA never insisted on anything. They said, ‘This is your golf course, we’re coming in for a week, and we’re going to hold our largest championship on it, and we’d like to give you some suggestions on what to do here, but it’s up to you what to do.’ At Erin Hills we were receptive to them, because we think they make a lot of sense.” 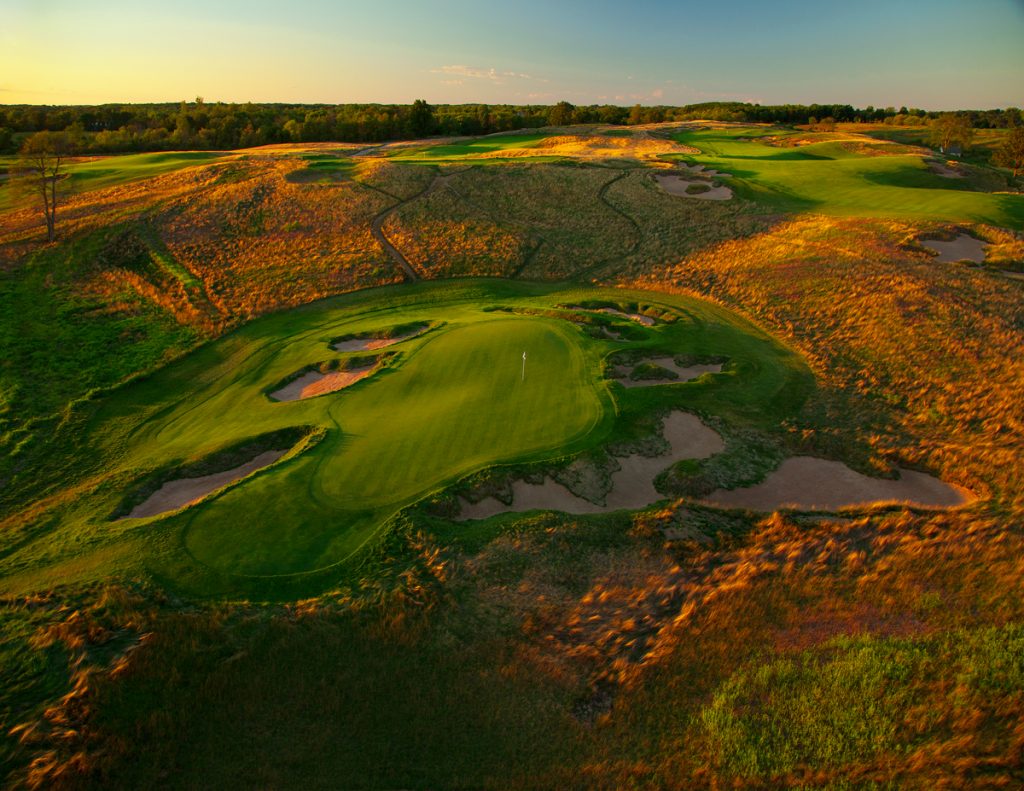 But clearly, nothing major was required of Erin Hills to hold a major championship.

“We’re really down to fine-tuning that golf course now,” Hurdzan said. “Erin Hills could hold the Open right now, but we’ve got a ways until we get there. So, we really just want to fine-tune it in every way that we can. As much as anything, all we’re changing are mowing lines, moving the fairways either in or out in certain places to allow for the slopes, but not a lot after that. It’ll be just a manner of manicuring the turf to a state that we really think is going to be U.S. Open quality.”

Reineking said he has the perfect turf for golf’s toughest championship.

“One of the things that makes Erin Hills sustainable is that we are a fine fescue facility, and that’s unique to the state of Wisconsin,” Reineking explained. “We don’t need to irrigate it as often, we don’t need to apply a lot of the chemicals you need with bentgrass, bluegrass or the more common types in the Midwest. That allows us to really brown out the course, and allows us to make it firmer and faster than other grass.

“In 2017, we’ll restrict water from probably mid-May on. If we have a dry and warm spring, you’ll see a dramatically browner facility. The aesthetics aren’t for everybody, but I think it’s the right direction.”

Erin Hills’ Competitions Director (and GolfTime Magazine contributor) John Morrissett said the excitement is already building at the club, as well as the state.

“As we know 2017 will mark the first time the United States Open Championship will have been played in Wisconsin,” Morrissett said. “We could not be more excited about that. The state has just taken off in terms of golf, and the state government has been so cooperative and supportive, and that’s one of the big reasons the state of Wisconsin has so much appeal to the USGA.”

“When the USGA selected Erin Hills, they didn’t look at this as a ‘one-and- done’ opportunity,” said Jim Reinhart, the General Chairman of the event. “They looked at this as a key site in the Midwest for the U.S. Open for many, many years to come.”

“I’ll be honest, I’m looking forward to seeing the Open at Chambers Bay (in 2015), but I think by comparison the Open at Erin Hills will be more exciting,” he admitted. “It’s gonna be awesome. And if things turn out as well as we hope, there’s probably a good chance that Erin Hills will get into some kind of regular venue for some USGA event. It’s really built for the infrastructure; they can really put a lot of people there.”

A PREVIEW AT PINEHURST

Which is why many at Erin Hills are quick to compare their club to the Open at Pinehurst. While they might look like polar opposites, in reality they have plenty in common.

“Last year at this time, we talked about how different Merion is to Erin Hills, but this year we’re going to talk about how similar a venue Pinehurst is to Erin Hills,” Morrissett said. “Obviously, the golf courses are quite a bit different. For example, you probably noticed that Pinehurst has a few more trees than Erin Hills (which has all of five). But the overall picture of the two sites is very similar.”

From location (both are 30 or so miles from a metro area), to land area (Erin Hills has more than 650 acres, Pinehurst has room for eight golf courses), the sites are indeed similar. And that’ll come in handy in 2017, when anywhere from 25,000-45,000 spectators fan out across Erin Hills’ 152 acres of wild, fescue-covered hills.

“This should mean a lot to the state,” Morrissett said. “In recent years, the economic impact of the U.S. Open has been between $140-$160 million dollars to that region. So the prospect of bringing that type of money to the area is quite exciting, to say the least.”

Morrissett says the club will need an army of volunteers — 5,000 or more — to help, but knows he can count on his state.

“For the (2012) U.S. Amateur, we needed around 800 volunteers, to put it in perspective,” he said. “For the U.S. Open, we’ll be more in the neighborhood of 5,000 volunteers. We’re very fortunate that we have a very enthusiastic and expe- rienced base of volunteers.”

Volunteer registration is expected to open toward the end of 2015, with tickets on sale in 2016.

“One of the common questions people ask is, ‘Where’s everybody going to stay during the Open?’” Morrissett said. “But one of the nice things about Erin Hills is that when you’re here, you feel like you’re hundreds of miles from anywhere, when in fact, you’re only 35 miles from downtown Milwaukee.”

When it’s all said and done, Erin Hills feels a ways away, but it’s close enough to get excited. Just like the U.S. Open.

For more information about the 2017 U.S. Open and Erin Hills visit www.erinhills.com.

BEST OF THE MIDWEST

Hurdzan-Fry have plenty of great golf in the Great Lakes. Here’s a look at some of their other incredible designs:

Wisconsin Dells, Wisconsin — A consensus Top-10 Best New Course when it opened in 2008, Wild Rock is a 7,400-yard gem on a roller-coaster piece of property. Makes for a great Hurdzan- Fry doubleheader with Erin Hills, as well. www.wildrockgolf.com

Peoria, Illinois — The No. 1 course in the state by Zagat survey, Weaver- Ridge is a treat well worth the trip from Chicago or just about anywhere, playing through forests and former farmland. www.weaverridge.com

South Bend, Indiana — In a town famous for its golden dome, Blackthorn Golf Club really shines. It’s a 7,136- yard touchdown that even includes the unique, 266-yard Blarney hole to warm up. Really. www.blackthorngolf.com