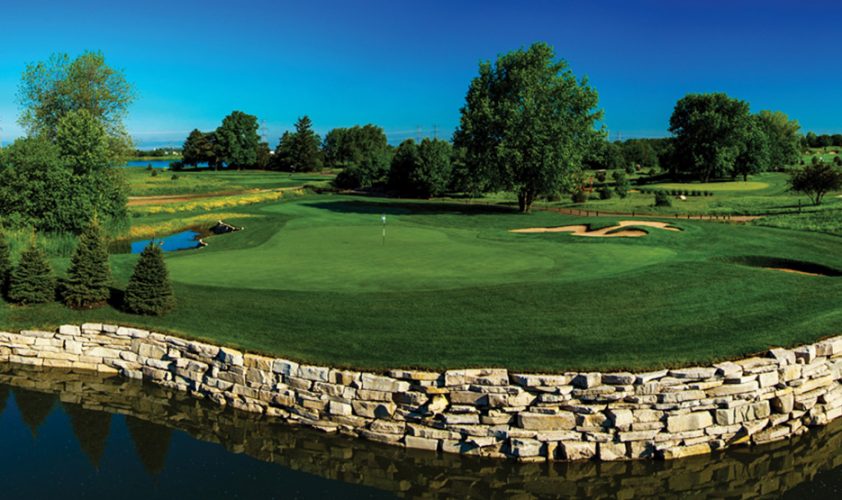 He doesn’t have his own line of clubs or clothing, and no vineyards are busy bottling his latest cabernet sauvignon. He doesn’t stamp out courses with teams touting his trademark, either. 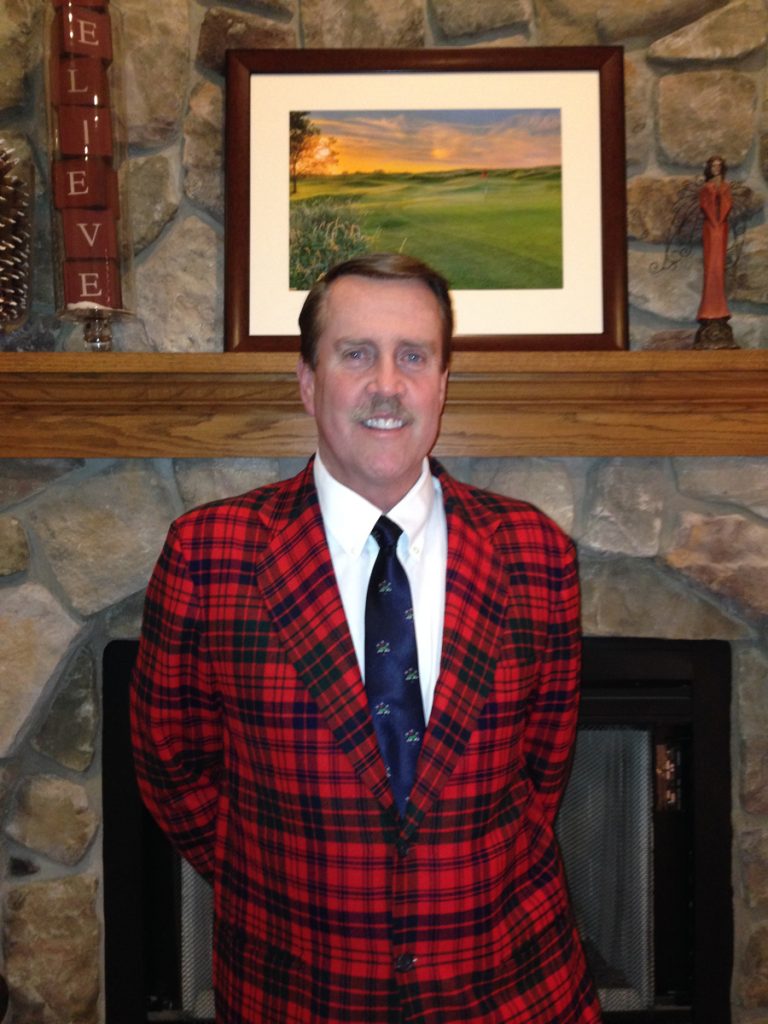 Ray Hearn is one of the hottest names in course architecture today, yet remains humble and grounded in Holland, Michigan.

Nope, the closest thing Ray Hearn has to a trademark is his meticulous eye for detail, and the broad, bushy mustache adorning his upper lip, the one he’s had to keep stiff through some tough times in the golf design industry.

These days, however, Hearn’s mustache hides a broad, Cheshire cat grin, thanks to a true passion for his work, and an ever-expanding trophy case, too.

You see, the exceedingly humble Hearn is coming off an incredible 2013, the kind of year most architects would willingly bulldoze Augusta National and Pine Valley to have. Hearn won the Global Innovator Award from Golf Inc. Magazine (he was the only architect even considered); the Design Excellence Award from the American Society of Golf Course Architects (which has a special place in his heart); as well as the Renovation of the Year from Golf Magazine, for his stunning recreation at Mistwood Golf Club in Romeoville, Illinois (his second such win in four years).

Throw in the acclaim he’s earned for his innovative redesign of Island Hills Golf Club in Centreville, Michigan, and it’s hard to believe Hearn can keep from bursting with pride, let alone remaining humble as ever.

“We’re very fortunate,” Hearn said, in his bid for Understatement of the Year. “We got into a nice string of renovation-restoration work. And word of mouth is the best advertising. I get these calls from different clubs: ‘Ray, I played golf with the committee chairman from this club, they’re going to be calling you.’ And really, after my 28 year-career, the last eight years or so, that word of mouth’s been propelling me.”

During a time in which new golf course construction is few and far between in the U.S., Hearn has excelled by rolling with it, almost rebranding himself in the process — a “Renovation Ray” for a new day and age in the industry.

“We’re developing a strong reputation from that,” Hearn said. “People ask me, ‘Do you like (renovations) more than new (construction)?’ And they’re both fulfilling, for different reasons. New is starting from scratch, it’s exciting. Renovations — especially the older clubs that have history — I dig that, man … the research.”

Hearn is at heart a world-class history buff, and the kind of guy who pours over plans from the turn of the century in his spare time. Turn him loose on a redesign at, say, the 100-plus-year-old Flossmoor Country Club outside Chicago, and he immerses himself in the club’s history for months before coming up for air.

“The biggest difference (between new construction vs. redesign) is the research,” he explained. “If you’re fortunate enough to get a club to restore … it’s like you’re calibrating an old work of art, or an old Victorian home. In these restorations, you’ve got to bring out the best of the past, but make it work with the modern-day technology — the clubs, the ball, and also with maintenance, too.”

Such was the case at his latest work at Flossmoor, which is earning raves.

“At Flossmoor, I paid great respect to (original architect Herbert) Tweedie and his routing, and his green design,” Hearn said. “And in his green design, I just embellished some of his lost edges and restored some of his features. But talking to some of the historians, some of the guys that had family members there (when it was built), and they all said the bunkers were pretty lifeless. So then I went to that George Thomas (style) bunker. It was pretty radical, I didn’t know how it would go over. I said, ‘Guys, it’s a style that might not be akin to Tweedie, but it sets you back in time.’”

AHEAD OF HIS TIME

But the great irony of Ray Hearn is that for a man who honors the past at every turn — he’s even taught an adjunct architecture course overseas in Scotland, Britain and Ireland — he’s always had a firm focus on the future.

In fact, Hearn knew what he wanted to do very early in life, and even wrote one of his idols, Robert Trent Jones, Sr., as a high school student growing up in Metro Detroit. RTJ wrote back and told him to go get degrees in soil science and landscape architecture, which is what landed Hearn at Michigan State University. There he pushed and prodded the professors into starting the school’s Golf Architecture curriculum, which it proudly touts today (all thanks to Ray).

After college in the late 1980s, Hearn went to work for Michigan golf design guru Jerry Matthews, where he had a hand in some of the state’s best clubs. After several years under Matthews’ apprenticeship, Hearn set out on his own in 1996, bringing some of his coworkers with him.

“It’s funny, I did three courses in 1996, when I left Jerry (Matthews), and decided to go out on my own,” Hearn recalled. “Some guys from the company wanted to come with me. I didn’t know where the work was going to come from. And in that year, I landed — within the first two weeks, this is like the Lord was shining down on me — I get a call from Sea Oaks (in New Jersey), out of the blue, I did Mistwood in Chicago, Island Hills (in Centreville, Michigan), and Traditions of Golf in Edmund, Oklahoma. I’m like, ‘Wow!’ They got me such great publicity.” 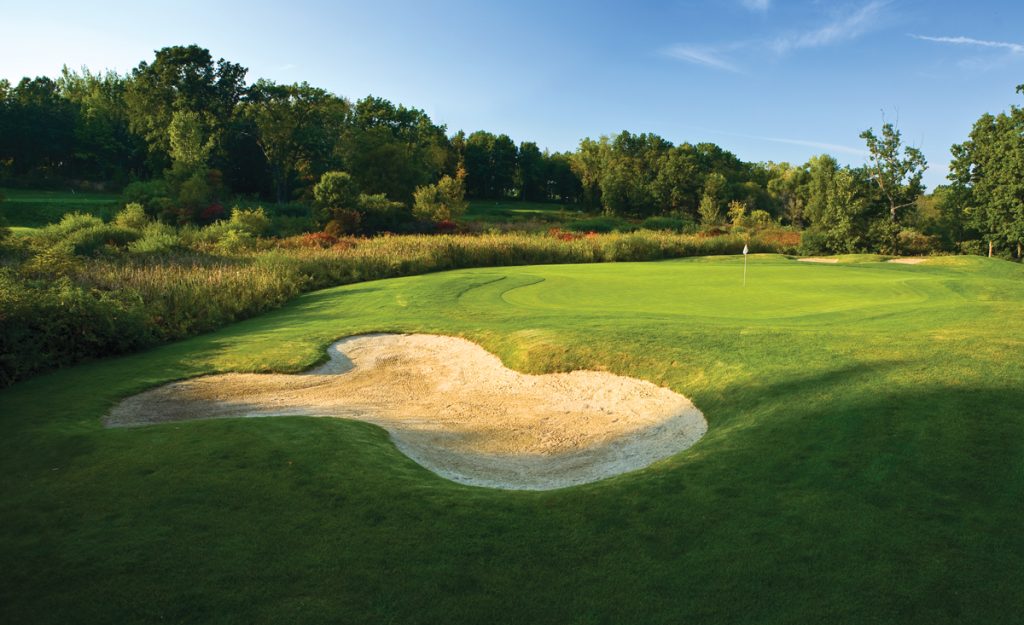 Since then, Hearn’s career has taken him around the globe, with designs in Egypt, Panama, France, Moscow and Vietnam, among others. He’s done highly-touted original designs throughout the Midwest and the rest of the U.S., from Mistwood in Chicago to a slew of “Best New” Top 10s in Michigan — including Yarrow Golf Club in Augusta, the Grande Golf Club in Jackson, and Hemlock Golf Club on the sandy shores of Ludington.

Each of his designs and redesigns have a different flavor, a different flair, and bear Hearn’s truest trademark: they’re fun, and fundamentally fair, for all levels of golfers.

“I think the holy grail of golf design is really designing something that everyone can enjoy regardless of their handicap,” Hearn said. “Can everyone achieve that all the time? Absolutely not. We all strive to get close. But there’s some architects that say, ‘Golf is really meant to be enjoyed by the better players.’

“I won’t mention names, but I’ve had that discussion with many architects. Some are at that Pine Valley, Carnoustie-type mentality. And that’s ego.”

It’s also one part of the trifecta of challenges the game faces that Hearn calls the “Three-headed Dragon.”

“What’s next is addressing the ‘Three-headed Dragon,’” he said. “Golf takes too long to play. Golf is too expensive to play. And golf is too intimidating. With the next generation, man, I call it the ‘thumb generation’ (mimics texting), you gotta really work hard, because they are not interested in golf.

“I don’t want to be all doomsday, I think golf will prevail, but we have to as architects, and developers and managers, really start thinking more out of the box. And golf is such a traditional game, golfers are conservative people to begin with, so change is difficult for a lot of golfers.”

But don’t bet out Hearn to find a way to make golf more appealing. His Island Hills redesign notably includes 3-, 5-, and 7-hole setups, giving golfers a chance to try out the game or squeeze in some quick swings on a busy schedule or a limited budget.

“I’m not the first one to do what we did at Island Hills, I just did it with a really innovative owner (Bob Griffioen),” Hearn said. “I said, ‘Bob, what do you think of a 3-hole course, a 5-hole, and then we could have a 7-hole east and west, and your 9-hole loops, then we can pay tribute to Nicklaus and do our 12- hole course.

“Island Hills loves it. It allows people to come into the game in a non-intimidating fashion, and say, ‘I’m going to try a 3- or 5-hole course, and it’s not going to kill me, it’s not that expensive, and it doesn’t take that much time. And once they come into the game, it’s addictive. It helps with that three-headed dragon.”

Slaying the dragon. It’s a noble task, for an ever-humble man.

We wouldn’t bet against him.