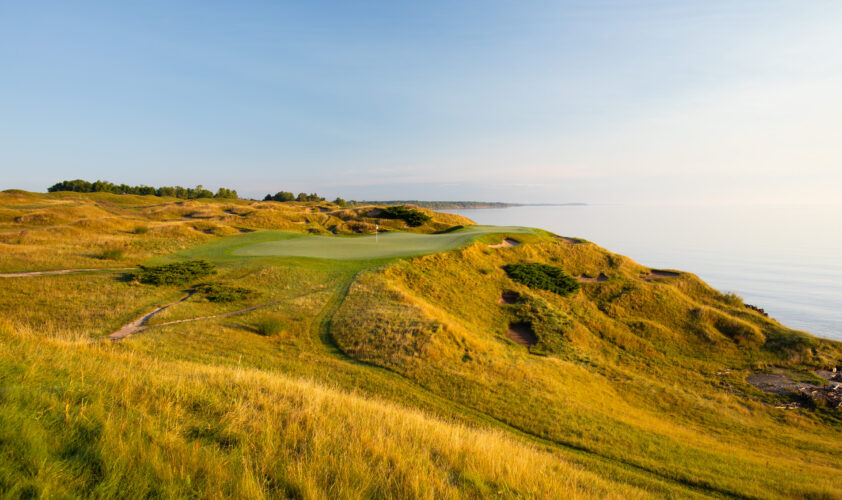 K eep your fingers crossed, avoid walking under ladders and, hope- fully, all of your good luck charms are in working order. Oh, and mask up. Then, just then, we might see some normalcy return to the 2021 Golftime tournament calendar.

Last year COVID-19 ravaged the world with its impact trickling down to everything in our daily lives, including our ability to watch and enjoy tournament golf.

Only a handful of professional golf events were conducted in the Golftime region in 2020 as the pandemic’s reach continued to grow.

Nationally, the PGA Tour canceled or

of America, Ryder Cup Europe and PGA Tour jointly decided to push back the event one year.

It will still be held at Whistling Straits on the rescheduled dates of Sept. 21-26. And Wisconsin’s Steve Stricker is still in charge of the U.S. team, his captaincy having been extended one year.

“At the end of the day, we want a Ryder Cup that will rival all other Ryder Cups in my home state of Wisconsin, and now we have the opportunity to showcase the event as it is meant to be seen,” Stricker said.

The hope is that vaccines will neutralize the virus enough so that the event can be staged with full corporate support and Wisconsin native Jerry Kelly defends not one, but two titles in the Midwest this summer postponed two months’ worth of tournaments and when play resumed in June, there were no pro-ams or spectators. The new normal included a U.S. Open in September and a Masters in November.

Perhaps the biggest event on the golf calendar last year also fell victim to the pandemic.

The 43rd Ryder Cup, scheduled to be held in September at Whistling Straits in Haven, Wisconsin, was postponed one year.

Left with no viable options to stage the Ryder Cup as scheduled in September 2020 because of the pandemic, the PGA helps create the atmosphere that makes the Ryder Cup unique in all of golf.

“That’s what makes the Ryder Cup so special,” said Seth Waugh, CEO of the PGA of America. “It’s the passion that it arouses, the tribalism, the nationalism.”

Tickets purchased for the 2020 Ryder Cup via rydercup.com will be automatically valid for the corresponding day(s) in 2021. Tickets will be mailed out approximately six weeks prior to the event’s new dates.

Following is the 2021 schedule (fingers crossed) for the Golftime region:

THE SKINNY: Curtis Thompson won by one stroke after the tournament was moved from May to September due to the pandemic.

THE SKINNY: Daniella Iacobelli won the tournament by shooting an 11-under 205.

MEIJER LPGA CLASSIC FOR SIMPLY GIVE

THE SKINNY: The LPGA boosted the purse
for the tournament in 2019, raising total winnings to $2.3 million.

THE SKINNY: The Bridgestone Senior Players is one of five major championships on the PGA Tour Champions.

THE SKINNY: This year will mark the third year of Detroit’s only PGA event.

THE SKINNY: Despite cancellation, the tournament continued to support long-standing charities.

THE SKINNY: Madison native Jerry Kelly will defend his title after the tournament took a year hiatus due to COVID-19.

THE SKINNY: 2021 will mark the tournament’s fourth year of play.

THE SKINNY: Kang rallied from five strokes down with six holes to play.

THE SKINNY: His win in 2019 was the first PGA Tour victory for South African Dylan Frittelli.

THE SKINNY: Michael Thompson birdied two of the last three holes to post a two-stroke victory.

THE SKINNY: Jim Furyk became the first player since Miquel Angel Jimenez to win his first start on the Champions tour.

THE SKINNY: Brandon Wu’s one-shot victory was his first on the Korn Ferry Tour.

THE SKINNY: Miguel Angel Jimenez used an eagle on a par 5 on the back nine during the final round to post a one-shot victory.

THE SKINNY: The 43rd Ryder Cup will try once again after being postponed in 2020 due to the pandemic.