Pete Dye was running late. Not that unusual for one of golf’s most storied architects, a man with more modern Top 100 courses than just about anybody, who always kept a schedule like Grand Central Station, but still, it wasn’t how he liked to operate.

It was in the spring of 2003, and the then-77-year-old legend had agreed to meet us at Brickyard Crossing, the incredible and historic course he rebuilt at Indianapolis Motor Speedway, just a few miles from his summer home at Crooked Stick Golf Club. But that morning his garage door was stuck, of all things, and he had to call the repairman to come out, fix it. Stranger still, he called the clubhouse to say sorry, he’s running a little late. It’s not like he had to call, but it was, after all, the thoughtful and courteous
thing to do.

And well, that was just Pete.

He arrived not long after with his “entourage,” in tow — his Belgian Shepherd, Sixty — and wasn’t quite what you’d expect from the world’s foremost course designer. Wearing a tan windbreaker and khakis, “Teeth of the Dog” hat upon his head and large, tinted glasses sitting squarely on his tanned face, he kind of looked like, well, your grandpa. And as he hopped in the golf cart and beckoned us over, we almost
wished he were.

Pete Dye’s incredible Stadium Course at the TPC Sawgrass is one of his most famous designs.

While he might have been an exceedingly modest, down-to-earth man in person, to the golf public, Pete Dye was a larger-than-life legend, one of a very exclusive few household names in the golf architecture business. Dye died on Jan. 9, 2020, at the age of 94, after a battle with Alzheimer’s, and 11 months after the death of his co-designer, beloved bride of 68 years and legend in her own right, Alice Dye. They are survived by sons Perry and P.B., both of whom are golf course architects.

Together, the Dyes were the most celebrated husband-wife duo in golf’s history, leaving an indelible, immeasurable mark on the game.

Pete’s legacy lives on in so many ways, most notably in the incredible golf courses he built over his six-decade career. Like the architect himself, you know many of his works by name. Kiawah Island’s Ocean Course. Casa de Campo’s Teeth of the Dog. TPC Sawgrass, with the most famous par 3 on the planet. TPC Scottsdale’s Stadium Course, with the most infamous par 3 on the PGA Tour. The Golf Club, in New Albany, Ohio.

And of course, Dye is famous for the unbeatable collection of golf in Kohler, Wisconsin, most notably the Straits Course at Whistling Straits, home to this year’s Ryder Cup (see our cover story here).

Pete’s list of incredible courses includes many of the Midwest’s very best, fittingly enough for a man born and raised in the Great Lakes. In addition to the Straits, the Irish Course, Blackwolf Run’s River and Meadow Valleys courses at Kohler, Dye’s designs dot the map all across the Midwest. The eponymous Pete Dye Golf Trail traverses seven designs throughout his adopted home state of Indiana alone, and includes must-play tracks like Brickyard Crossing and The Fort near Indianapolis, the Kampen Course at Birck Boilermaker at Purdue University (which he charged $1 to design), and of course, the dramatic, dynamic Dye Course at French Lick Resort.

Dye did so much more than build courses, of course, and he and Alice were instrumental in growing their industry and the game throughout their illustrious careers. The Dyes inspired and sponsored many of the game’s greatest architects over the years, amplifying their impact on the sport and shaping its foundation and future.

Suzy Whaley, president of the PGA of America, shared her thoughts on Twitter: “Pete & his late wife Alice formed the greatest force in golf design history. The Dye family will forever be linked to many of the thrilling championships in PGA history & for something that they intended all along — that we embrace golf’s life values.”

“It was Pete who inspired me to start designing courses more than 50 years ago, and in so many ways I owe my second career to him,” said fellow golf legend Jack Nicklaus, also on Twitter. “I think Pete Dye was the most creative, imaginative and unconventional golf course designer I have ever been around.”

“Pete Dye was a great golf course architect — a true legend,” said fellow Midwestern architect Raymond Hearn. “He was never afraid of taking a risk. He adhered to the design principles from the strategic and heroic schools of golf course design. He was a friend to many, and one of my sponsors in the (American Society of Golf Course Architects) ASGCA.”

Dye helped countless others get their footing in the industry, including Tom Doak, Bill Coore, Bobby Weed, Chris Lutzke and Paul Albanese, among many others.

Not bad for a fellow who started as an insurance salesman. 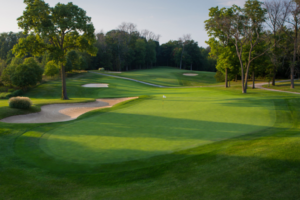 The Fort in Indianapolis is one of Dye’s very best in the Midwest.

Pete was actually born Paul Burke Dye in 1925 in Urbana, Ohio, the son of Paul and Elizabeth Dye. His father was an insurance salesman, bar owner, postmaster and politician, who ran unsuccessfully for Congress in 1932. The elder Dye became chairman of the Ohio State Democratic Party, and once gave Pete the honor of introducing Franklin Delano Roosevelt from the back of the presidential train. Pete’s parents were both avid golfers, and Paul helped design and build the Urbana Country Club in 1922.

Paul Dye had a profound impact on his son, never pushing him down the path of course design, but rather providing him with valuable exposure to several great courses such as Scioto, Inverness, and the Donald Ross-designed Springfield Country Club nearby. Pete didn’t know it at the time, but he was already taking mental notes in classical course design.

During World War II, Pete was signed up for paratrooper infantry, and was stationed in Fort Bragg, North Carolina. The officers at Bragg soon learned of Dye’s prowess on the golf course and took a shining to him, dragging him off to play nearly every day. While an enviable assignment, to be sure, it also kept him from overseas duty. “I keep telling my grandchildren that I won the war,” Pete laughed. “But I was really running the Bragg golf course, and I played Pinehurst every day.”

After the war, Dye made good use of the G.I. Bill, and with the added help of a partial golf scholarship, attended Rollins College in Florida. And though he never finished with a degree, he was fortunate enough to find his eventual bride, Alice O’Neal, a star on the women’s golf team. After Alice graduated in 1949, they returned to her hometown of Indianapolis, and married in 1950.

START OF SOMETHING BIG
Alice — the better golfer of the two, Pete readily admitted — was busy winning every amateur tournament around, while Pete was making a name for himself in another field — as an insurance salesman. “I don’t like to brag, but I was the youngest member of the Million Dollar Roundtable,” he said. He made a large portion of his insurance sales on the golf course, naturally, and was so adept at the field that his company eventually asked him to take over the agency.

But it’s hard to ignore a calling, and in 1959 he and Alice set out for careers in course design. But as they learned early, it was easier said than done. They ran magazine ads and courted the other top designers of that era to learn from, including Robert Trent Jones, all to no avail. But after enduring that spate of initial rejection, the Dyes began by building a little nine-hole course in Indianapolis called El Dorado. Pete poured everything he knew about design at that point into those nine holes, and some might even say he overdid things a bit. The routing for the course crossed the creek winding through the property 13 times in nine holes. Little did he know, it was his career that had crossed over, for good.

By chance, former University of Michigan President Dr. Harlan Hatcher stopped and played the nine-hole course the following year. Now, Dr. Hatcher certainly could have had his pick of fine Indianapolis courses
to play, but for some reason decided on El Dorado. And he liked it so much, he decided to give Pete a call.

“He was a cheap fellow, probably, saw he could play it for five or 10 dollars, so he played the nine holes and liked it,” Dye recalled with a laugh. “He called me up and said he wanted me to build the University of Michigan course. I said I didn’t know anything about building a golf course, but he said, ‘Well, you built that nine holes.’ So I went up there and talked to him and built that University of Michigan course (Radrick Farms) and been building ’em ever since.”