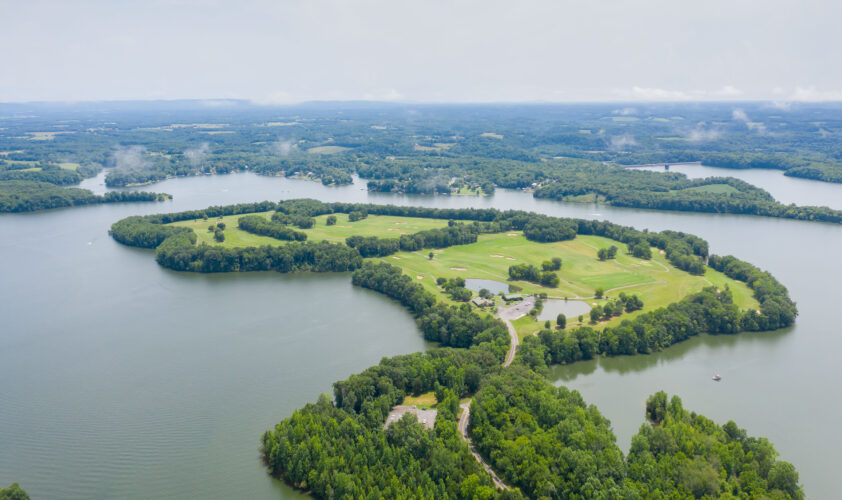 One of the popular ways to savor the Volunteer State is by following the Tennessee Whiskey Trail that takes in dozens of spirited destinations, places like Bootleggers Distillery in Hartford or Doc Collier Moonshine Distillery in Gatlinburg or, for many, the mother ship of whiskey in America, Jack Daniel Distillery in Lynchburg.

As a billboard for Jack Daniel’s proclaims, “There are road trips, and then there are pilgrimages.” 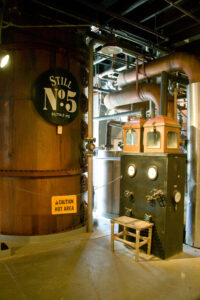 The most famous distillery on earth, Jack Daniel’s, in Lynchburg.

But there’s another pilgrimage through Tennessee that golfers might like even more — or at least as much. The Tennessee Golf Trail offers fine and affordable 18-hole golf courses in nine state parks, including three “Bear Trace” Jack Nicklaus signature designs.

Who wouldn’t volunteer for that? Over several trips through Tennessee I have taken time to play four rounds on trail courses, including the Buford Ellington course at Henry Horton State Park in Chapel Hill, the Frank G. Clement Golf Course at Montgomery Bell State Park in Burns and, on two occasions, the picturesque and playable Bear Trace at Tims Ford State Park in Winchester, a Nicklaus design on lovely Tims Ford Lake.

The golf trail got its start in the 1960s when “the powers that be decided they wanted to get into the golf course, hotel and hospitality business,” said Mike Nixon, director of golf operations for the state. Many of the courses were built with lodging on site. For example, Montgomery Bell, named after a wealthy industrialist who established the first major iron furnace west of the Allegheny Mountains, has the usual state park amenities including campsites and picnic areas but also rental cabins and an inn and conference center with more than 100 guest rooms.

Reaction to the original trail was so positive that “in the ’90s they decided they’d venture out and build more golf courses and got Jack Nicklaus involved,” Nixon said. Of the five Nicklaus designs in Tennessee, three eventually became part of the trail.

Some of the courses that are close to cities with large populations — Henry Horton is just south of Nashville and the Bear Trace at Harrison Bay State Park is near Chattanooga — are popular with local residents as well as destinations for out-of-state visitors. Others, like the course at Tims Ford, are in more remote settings but still draw golfers who want to experience a Nicklaus design at a reasonable price.

“We do remote well,” Nixon said.

The Tennessee Golf Trail is not as well known as Alabama’s more celebrated Robert Trent Jones Golf Trail, which Nixon acknowledges is “the gold standard” for such course collections.

“We’d love to do everything they do and I’d love to have their money,” he said. But the golf options offered in Tennessee parks, along with non-course activities like fishing, boating, hiking and more, mean the park system ranks among the best in the country.

“We’ve got 56 state parks,” Nixon said. “Every year we are in the top five state park systems and some years we’re number one. We’re proud of our parks.” 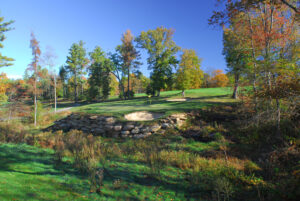 The golf courses have racked up their own share of accolades. The Bear Trace at Cumberland Mountain State Park in Crossville has twice been named as the number one public course in Tennessee, among other honors, while Fall Creek Falls State Park Golf Course in Pikeville has been named by Golf Digest as one of the Top 100 Public Places to Play.

As would be expected of golf courses in state parks, natural scenery is abundant. Warriors Path State Park Golf Course in Kingsport is located on the shores of Fort Patrick Henry Lake and in the foothills of the Appalachian Mountains, which helps make it one of the most popular courses in the state system.

Paris Landing State Park Golf Course in Buchanan hugs the western shore of Kentucky Lake, where several holes with elevated greens offer spectacular views of the region known as the “Land Between the Lakes.” When it opened, the Bear Trace at Tims Ford was described by one publication as a “glittering newcomer” for its picturesque setting. 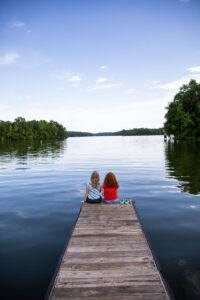 Kentucky Lake is also a great place to dip your little piggies after a long day’s hike. Photo by Nile Young Jr.

Wildlife is, of course, abundant. At Montgomery Bell, a half dozen deer on one fairway had no objection to our playing through. The trail courses are under the auspices of the Tennessee Department of Environment and Conservation, and Nixon said every effort is taken to show that golf does not conflict with a good environment. All nine courses have been designated as a Certified Audubon Cooperative Sanctuary for steps taken to preserve and enhance wildlife habitat while protecting land and water resources. All courses have also been recognized as Groundwater Green sites by The Groundwater Foundation for similar efforts to protect local water supplies. Switching from gas carts to electric also had a positive impact. 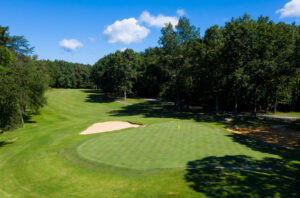 “I think we’ve done a good job on that,” Nixon said, citing several awards won by the state course system for environmental leadership. Each year about 200,000 rounds are played on trail courses. Nixon said the goal is for the park courses to break even, so green fees are kept affordable by destination course standards.

“Considering what we charge we do pretty good,” he said, “but golf is cheap in Tennessee. That’s just the way it is. You kind of deal with what’s in your path.”

But Nixon said improvements are always being made as the budget allows. Last year new lodges were being built at Paris Landing and Fall Creek Falls and some courses were getting new tees and other upgrades. All courses have driving ranges, practice greens, carts, on-site or nearby lodging and club rentals and lessons are available. For avid players there is a Tennessee Golf Trail Annual Pass.

One thing Nixon couldn’t do was name his favorite of the nine courses, much as a Tennessee whiskey man could hardly be expected to name just one favorite tipple.

“That’s kind of like your children in a way,” Nixon said. “Harrison Bay’s really good, Tims Ford is a lot of fun, Montgomery Bell is just a real neat golf course …”

And there were six he couldn’t have mentioned after those. In Tennessee, state park golf is big family.

Tee times can be made with individual courses or online at www.tngolftrail.net. 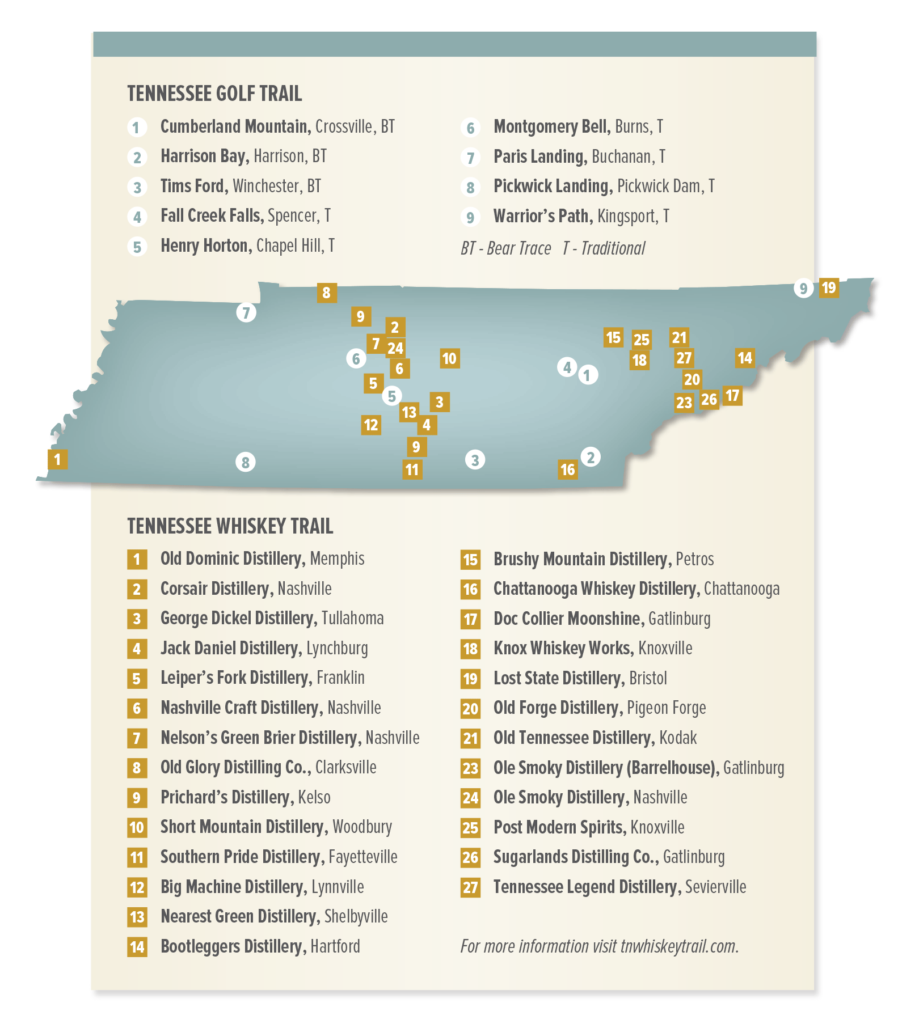