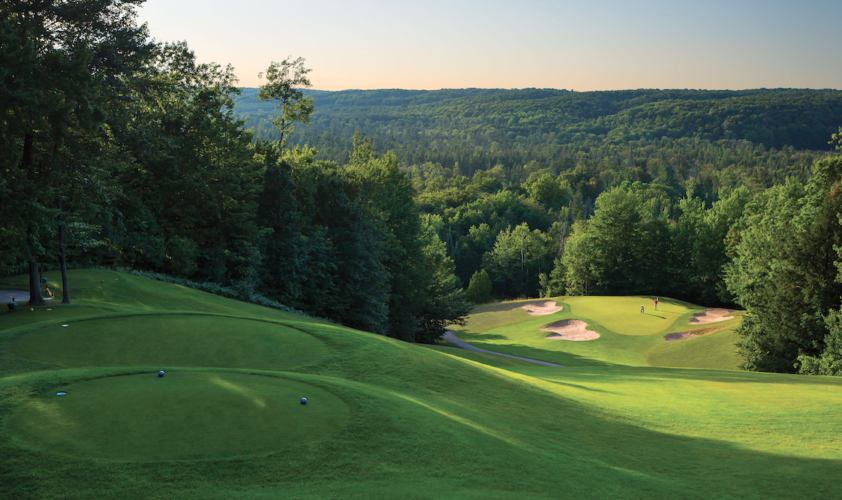 Even after all these years, it still sounds odd whenever I tell golfers to head for ski country if they’re looking for some great tracks. In a weird way, it’s like saying to an avid downhill skier, “Brother, I know a long par 5 that you would love.”

But that’s the way it is in central northern Michigan, in and around the bustling Bavarian-themed town of Gaylord. Long known as one of the top ski areas in the state — partly due to its hilly terrain and partly due to the heavy snows that blow in off Lake Michigan and Lake Superior during the winter — Gaylord (commonly pronounced Gay-lured) is now considered one of the top destinations for golf in the country.

While it’s true that golf has been played in northern Michigan since the late 1880s, Gaylord as a golf mecca actually began with the 1987 opening of a new course at the former Sylvan Ski Resort a few miles east of town. The course would be called The Masterpiece and its designer was the late, great architect Robert Trent Jones Sr. Jones, as the story goes, also came up with a new name for the facility while touring the property in search of a routing plan. Standing on what would become the tee of the par-3 sixth hole — the green to be built some 120 feet below — all the designer could see were the tops of thousands of trees spread out over the beautiful Pigeon River Valley.

In an instant, “Treetops Resort” was born. Today, the scenic but very challenging Masterpiece (tipping out at 7,007 yards) is one of five layouts at Treetops. The Signature and Tradition courses at Treetops — both designed by well-known golf instructor Rick Smith — measure between 6,400 and 6,600 yards from the back tees. The Premier course, designed by Tom Fazio (his only course in the state of Michigan), offers a back-tee length of over 6,800 yards. All of the courses feature beautiful scenery and lots of elevation changes, and all offer a choice of multiple tees to match each player’s ability. But wait! No trip to Treetops would be complete without taking a whack at the resort’s famous par-3 course: Threetops. Also a Smith design, Threetops was the long- time site of the “Par-3 Shootout” on ESPN. It’s tough but it’s a blast. 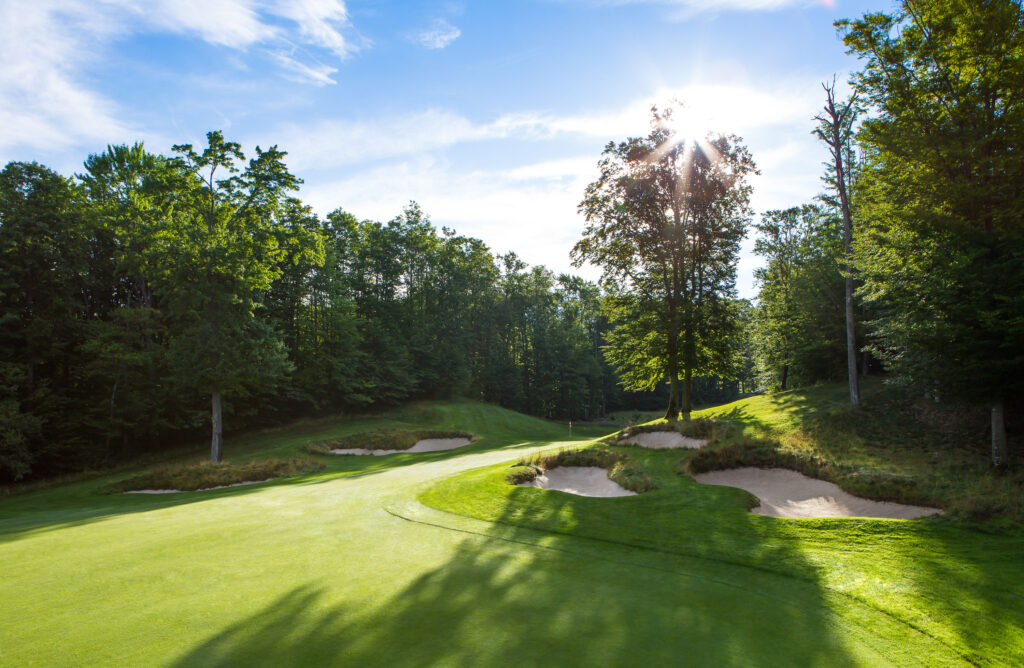 Just south of town, on the west side of Otsego Lake, is The Natural at Beaver Creek Resort. Opened in 1992 and designed by Jerry Matthews (who, along with his father Bruce created dozens of courses in the state), The Natural may be the epitome of the Northern Michigan golf experience. You want rolling terrain? You got it. You want wetlands and wildlife? You got it. However — unlike most tracts in the area — this is not a bomber’s course. It’s only 6,330 yards from the back tees (two others are avail- able), but it’s extremely narrow due to the hundreds of trees lining most, if not all, of the holes. One of the most common sounds you’ll hear here, I suspect, in addition to the chirping of birds and gobbling of wild tur- key, will be the thock of tee shots bouncing off the beautiful oak, maple and birch trees. The Natural is pretty, playable and fun, but it’s also tighter than your Uncle Bob.

Like all great golf destinations, Gaylord offers lots to do before or after teeing it up. The Pigeon River State Forest, for example, consists of 105,000 acres and is home to one of the largest free-ranging herds of elk east of the Mississippi River. Thanks to the hard work of the Michigan DNR, which maintains the elk’s habitat, these majestic animals inhabit the area the year-round. Several sites outside of town are excellent for viewing the herd from a safe distance, either with binoculars or spotting scopes.

The best months for viewing are September and October (mating season) and from late April to early May. A small herd of elk is cared for by the city itself and the nearby site is easily accessible throughout the year. It’s located (where else?) right across from the Elk’s Club on Grandview Boulevard. 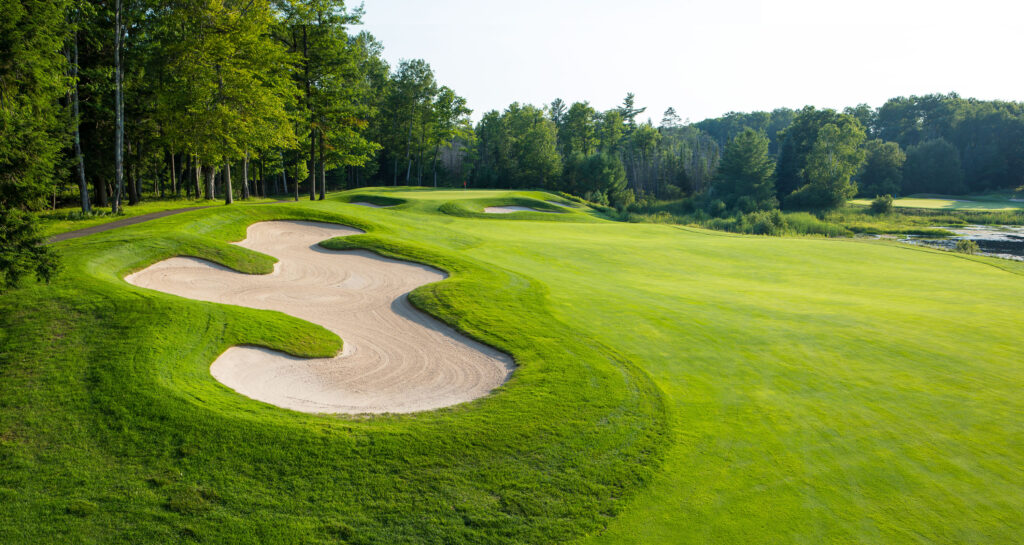 Forty miles or so northeast of Gaylord, outside the small town of Onaway, sits one of the best, most beautiful courses in Michigan — if not the country: Black Lake Golf Club. Designed by Rees Jones (son of the aforementioned RTJ Sr.), Black Lake is a big-time layout that opened in 2000. In 2013, Golf Digest placed it No. 69 on its “America’s 100 Greatest Public Courses” list and additional accolades have followed. The centerpiece of the Black Lake Conference Center, owned by the United Auto Workers and featuring lodging, dining, boating and other amenities, this spectacular layout is carved through oak, pine, aspen and maple trees on gently rolling terrain. Five sets of tees are available with a back-tee length of 7,035 yards. If you’re anywhere near the area, Black Lake is definitely worth a visit.

Pretty much straight west of Onaway, a few minutes off I-75, there’s a course that’s just the opposite of Black Lake: Indian River Golf Club. It’s not spectacular, it’s not big-time. It’s just very playable and a lot of fun. Established as a 9-holer in 1923, Indian River was soon reworked by famed English golfer and architect Wilfred “Wilfie” Reid (designer of numerous courses around Detroit}. In 1984, architect Warner Bowen was brought in to update the exist- ing course and expand it to 18 holes. Today, Indian River prides itself as being one of the “friendliest” courses in the state.

The fairways are mostly tree lined yet wide, there’s some water but not a lot, and the greens are fairly flat. Even from the furthest of its five sets of tees (6,700 yards), Indian River is an enjoyable place to tee it up.

While you’re in the Gaylord area, make sure to take in one of the great wonders of Michigan: the Mackinac Bridge. Located within an hour’s drive straight up I-75 to the north, this marvel of engineering spans the Straits of Mackinac between lakes Huron and Michigan and links the upper and lower peninsulas of the state. At five miles in length from tip to tip, “Mighty Mac” is the fifth-longest suspension bridge in the world. Opened in 1957 after three years of construction, the bridge at mid-point is almost 200 feet above the icy water and enormous cargo ships that pass below. Believe it: A trip across will have your eyes popping and your heart pounding.

Back in Gaylord, your heart will also be racing when you stand on just about any of the tees at The Tribute — either because of the stunning views of the Sturgeon River Valley off in the distance or because of the challenging holes you’re about to play. The newest of two layouts at Otsego Resort, The Tribute was designed by Rick Robbins and PGA Tour winner and NBC golf commentator Gary Koch. At 7,087 yards from the tips (three other tees are available), The Tribute is not excessively long by today’s standards. Don’t let that fool you. Due to the frequent and dramatic elevation changes, this beautiful and exceptionally-designed layout can play a lot longer than what you see on the scorecard. This course is also well bunkered and the greens are well undulated. Like Black Lake, The Tribute is a big-time course and the high praise it’s gotten over the years is well deserved.

Two fine facilities east of the city are The Loon and Michaywé (pronounced Mich- a-way). Like many of the resorts around town, The Loon offers multiple courses and a variety of lodging to choose from. The Ridge course at the Loon Resort is another Jerry Matthews design that opened in 1988.

The shortest of the three courses here, the Ridge tips out at 6,231 yards. Slightly longer at 6,421 yards from the back tees, the Lakes course offers two different types of scenery. Nine of the holes work their way through woods and over ski slopes, while the other nine holes meander around lovely Lake Michaywé. The resort’s namesake course — The Loon — is a Butch Harmon Signature Design, the only one I’m aware of in the state. (Frankly, I didn’t know the famous golf instructor designed courses.) There’s water and wetlands, tons of trees, and beautiful scenery everywhere. The Loon is the longest of the three layouts here at 6,701 yards.

Another of the highly regarded layouts in the area is the Pines course at Michaywé. Designed by Robert Bills and Don Childs, this very pretty, sturdy but enjoyable tree-lined track opened in 1973. As testament to its quality and challenge, the Golf Association of Michigan selected the Pines to host the Michigan Amateur Championship in 1991. It was the first time in the association’s long history that a resort course was chosen for this honor. Five years later, the Pines hosted the event for a second time. Thirty-some years after it opened, Mr. Childs returned to Michaywé to remodel, strengthen and lengthen the layout. Today, the course provides a choice of five tees and a measurement between 5,194 and 7,040 yards. The Pines is a good one.

In addition to the great golf and skiing, the Gaylord area offers water activities of all kinds (hey, Michigan isn’t called the Great Lakes State for nothin’). Thanks to the 90 inland lakes to be found here in Otsego County, canoeing and boating of every type are mainstays throughout the warmer months. Kayaking has also become an extremely popular sport in more recent years. And of course, where there’s water there’s fishing. Five of the most famous and beautiful rivers in the state — the Sturgeon, Black, Pigeon and Manistee, and the upper branch of the Au Sable — flow out of the county and feature what many anglers believe is the best trout fishing (brook, brown and rainbow) not only in Michigan but the entire Midwest. It’s definitely a water wonderland.

Of all the courses in the area, Gaylord Golf Club may be the one with the oldest “feel” to it. But, in my opinion, that’s a good thing not a bad thing. Established as a private club in 1924, a new semi-private club was built on its current site in 1975. “Parkland” is definitely the word to describe the design style. There are lots of trees, of course, and plenty of bunkers, but the fairways are quite wide. And what elevation changes there are, are much more gradual than severe, either uphill or down. The slopes of the good-sized greens are less severe, too; many of them merely tilted from left to right, right to left or back to front. Kind of, well, “old” style. Four sets of tees are available at Gaylord GC, with the shortest at 5,104 yards and the longest coming in at 6,506 yards. It’s pretty, it’s fun, and it’s a great place to tee it up and end your round with a cold brew.

Which thankfully, is something else you’ll find in abundance around the Bavarian-themed town of Gaylord.