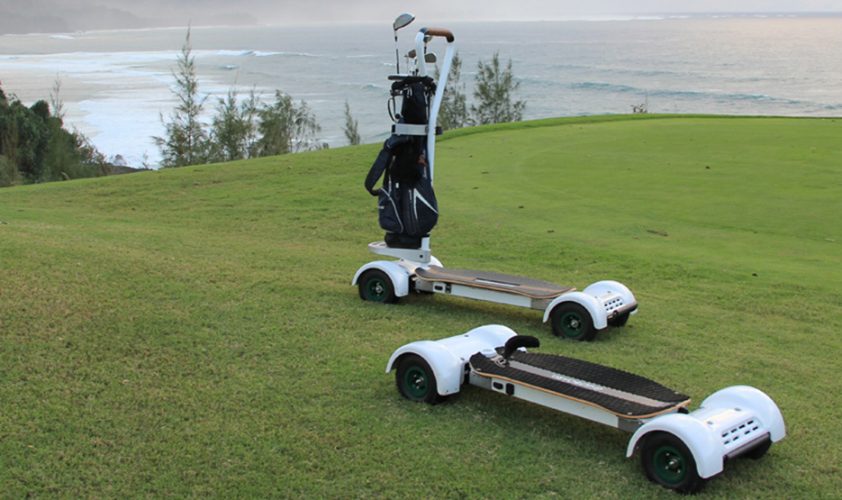 That’s the perception of golf for many millennials, who’d often rather sit inside with their Playstations than being outside actually playing.

Wait’ll they get a load of this.

This, of course, is the new GolfBoard, the innovative-but-unlikely love child of a golf cart and a surfboard. Launched at this year’s PGA Merchandise Show in Orlando, the motorized, four-wheeled GolfBoard won the show’s “Best New Product” category, generating some serious buzz about the board.

Jim Black, Senior Sales & Marketing Representative for GolfBoard (as well as a Bellaire, Michigan resident), said it’s easy to see why people respond to it.

“It’s an amazing product we really believe is going to change the golf landscape,” Black explained, talking in the midst of a standing-room-only crowd at PGA Show booth. “It’s going to get the younger generation involved in golf, making golf more of an active sport. Unfortunately, golf kind of has a ‘boring’ reputation for the younger crowd. This will get them a lot more excited about the game.”

The GolfBoard lets you literally surf the turf in style, going six or 12 miles per hour, and using your body to turn.

After seeing the $3,500 board in action (don’t miss the videos on its website, www.golfboard.com), it’s easy to call it the wave of the future.With a wireless handheld remote and optional bag mount and handle, the GolfBoard lets golfers “surf ” across the turf, steering with subtle leans to and fro.The board boasts a patented four-wheel drive with positraction technology to handle the hills, and is powered by a lithium-ion rechargeable battery.The board goes about two rounds or 20 miles on a charge, and can be quick-charged in about an hour.

“It’ll climb the steepest hill, and it’ll go down the steepest hill at an even rate of speed, without going out of control,” Black explained. “The forward motion is controlled by your remote control, turning is your body movement, so it’s a lot more engaging than a golf cart, and you’re not going to cool down in between golf shots.”

Another beneficial side effect of the board, Black said: it keeps people moving. “It’s going to greatly increase the speed of play, which is a huge problem in golf right now,” he said. “Everybody can get on a board, go to their own shot, and go from there. It’s more fun, more excitement, and more golf!”

Admittedly, the GolfBoard was born out of a somewhat simpler necessity than changing the game. Self-described snowboard addict Don Wildman, founder of Bally Total Fitness, wanted to use an electric skateboard to ride the steep slopes of his local Malibu course as a fun way to “get in some turns” during the sum- mer months. But as much as he tried, an off-the-shelf, one wheel drive skateboard wasn’t safe or powerful enough for some of the steeper fairways.

“They kicked him off, because he was tearing up the turf,” Black explained.

The company officially formed in August of 2013, launching with a successful Kickstarter campaign online. The board itself has been in development for 2 1⁄2 years, Black said.

“We got funding through Kickstarter, and it’s really taken off from there,” he said. “There’s been lots of trial, lots of error, but we really think we’ve gotten it to a perfected point.”

And according to Black, it doesn’t take long to perfect riding, either.

“We think the learning curve is about two shots,” he said. “Once you get on it and get a feel for how fast you go, and you lean left or right to turn. It’s got a toggle switch on it, high or low, and it goes either 6 or 12 miles an hour.”

Regardless of where you might have it toggled, it’s clear the GolfBoard is on the fast-track to success.The company has already sold more than 500 boards across the country, with a growing number of courses courses offering it nationwide. Plus, it might not be long before you’re seeing a version off the course, as well.

“We hope to have an urban version, and possibly even an X-Games version, too,” Black said.

For GolfBoard, the surf — and the future — is clearly looking up. 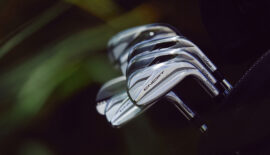 Preview 2021 | After a record-breaking 2020 season, the golf equipment industry is back with some swagger to its swag. Here’s a look at some of the best gear of the year. 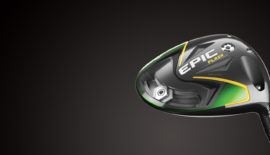 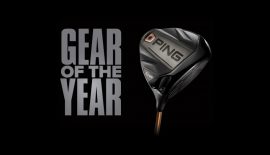